Home Featured How To Tell If A Man Is Bad In Bed Using Social Media
Featured
Men
Sex
January 22, 2014 Gee 21 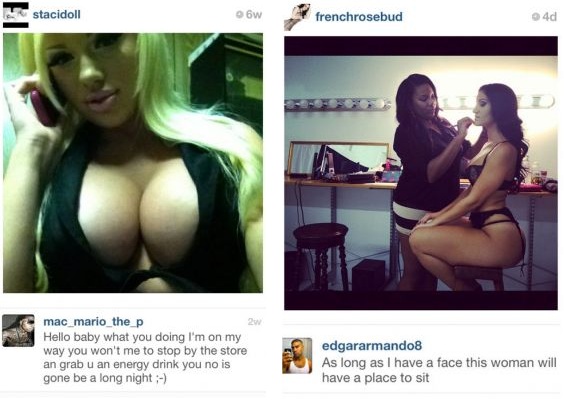 In Part One (How to Turn Her On), we examined the qualities that are critical to a woman’s genuine sexual arousal and satisfaction. I am stressing the word “genuine” because whether we like it or not, most women at one time or another have faked it. So even though you may believe you have left all of your conquests fully satisfied, odds are against you in that you have more than likely been a victim of that duplicity at one time or another! In this article, we will examine the specific ways in which a man shows that he just may not be capable of pleasing a woman based off of his behavior on various social media outlets.

Having a multitude of video vixen/thirst traps/porn stars as friends.

One of the biggest turn-offs for women as far as sex goes is feeling as if she is sexually insignificant and replaceable. She doesn’t want to feel like you view women as merely interchangeable orifices that you use in order to get your rocks off in a wide variety of ways and scenarios. She wants to feel like her mentality is special to you and that her unique physical attributes arouses you and are critical to your satisfaction. We want that viewpoint to be an honor not afforded to anyone else while you are dealing with us. Even if you spit all the game in the world but you are still following hundreds of women on Instagram, your actions and your words will contradict each other and she will see that. Her dried up loins will soon follow.

If he is not able to spot these traps from a mile away and keep his dignity and decorum intact, he most likely doesn’t have the mental capacity to sex a woman with his mind or his words. It is the equivalent of a woman being easily swayed and impressed by a man’s flashy display of material wealth. To put it simply, the way a man views gold diggers is the way women view men that fall easily and hard for thirst traps. Being the male equivlent of a gold digger is not the business.

To women, these men have not fully matured past boyhood and are therefore not capable of pleasing a woman in a holistic way. He doesn’t have the substance to truly appreciate a woman as unique or special. He is shallow, superficial, and easily swayed by the next fat ass. He will not be capable of making a woman truly feel like a queen or exclusive during sex. In the back of her mind and in her heart, she’ll know that maybe she has him for a few minutes, but not as long as she needs to in order to truly feel sexually desired. Women need to feel like they are sexually desired in a very intense way in order to really hit that peak of satisfaction.

Now, you are fully aware that your Facebook friends (including your momma, family members and coworkers) are able to see your interactions with other people and pages. It is public. Yet you still put all your business, superficiality, lack of self control and lack of judgement out on front street. Very sexy. That shows a definite lack of self-control. And as we all know, there is nothing worse than a man with little self-control or stamina in the bedroom arena. She wants to feel like her beauty and sexuality elicits an exclusive reaction out of you. If she sees you giving that same reaction to 50-11 other frivolous women, that will dry her up quicker than a sheet of bounty on a drink spill.  If she doesn’t get that feeling of exclusivity and feels like she is simply one of many, I guarantee you no matter how much she pretends and hits all those octaves, her enjoyment of sex with you will have decreased by at least 50 percent.

Plus, it is desensitizing. Studies show that the more you look at highly sexualized images, the more you will require in order to get off. If a man spends a great part of his day looking at a variety of sexually explicit images, it will ultimately affect his sexual performance and satisfaction.  Suddenly, regular women won’t be able to get you off in the same way as before. It will distort your mind into what you find sexually arousing. Focusing on your satisfaction can become habitual to the point where it leads you to become a self-centered lover.You will be dependent on unrealistic stimuli in order to be turned on. That will have a domino effect: She will sense that you are not as erect, are taking longer and therefore feel like she is not as capable of satisfying you in the intense way that she’d like. That will be a huge blow to her ego and hinder her from attaining a mind-blowing orgasm.

A major part of sex is mental. If you are not able to view a woman, or at least make your woman feel like she is the only one capable of driving you crazy in that moment, you’ve already failed and are already on your way to having her faking it. Even worse, she will be having sex with you not because she enjoys it but out of low self-esteem, immaturity, and desperation. Maybe she wants to get a ring or get her bills paid. Is that really the type of woman you want to be laying up with or risk spreading your seed to? The choice is yours.

Gee is a writer born and raised in Brooklyn of Caribbean descent.  The only girl with two older brothers, Gee is quite used to making waves by offering a feminine perspective in a male dominated world. A true product of the 90s, she likes to listen to Wu Tang, play old school video games and watch Seinfeld. She lives for playing devil’s advocate, never takes things at face value and always roots for the underdog.

Check out some of her candid observations and musings here:

tags: Dating Men sex Women
previous Stalking Stories: I See You, But You Don't See Me...
next 5 Reasons You Should Worry About Her Work Husband