The King of Broken Prediction is back for one more disappointment.

As discussed recently, I’m really bad at guessing what will happen in sports. My latest whiff was just a few short weeks ago. Woops.

There’s only one more game this NFL season, so I have 50/50 odds to end the season on a high note. At this point, a coin flip is way more reliable than I am, so this is my best chance in a while. If it means anything at this point (it doesn’t), I feel pretty good about this one.

I read the tea leaves. I called Ms. Cleo. I threw down some chicken bones. The Seattle Seahawks will win the Super Bowl. Here’s why:

If you’ve turned on any sports station lately, you have seen the endless coverage of Sunday’s game. Analysts are quick to point out that this is a matchup between the top-ranked offense and defense, which should give us a pretty fun game.

Denver’s offense has been great all season. Actually, they have been beyond great as Peyton Manning (dubiously) set the record for pass yards in a season.

The Seattle defense is just as good. I see them playing physically with the Broncos’ receivers, taking away the short passes that Manning used so successfully all season. Knowshow Moreno has been surprising this year, but I don’t trust him to beat the Seahawks in the Super Bowl. Nah son.

The Weather Will Suck –

First of all, I hate the idea of a cold weather Super Bowl. Who is against the idea of great weather, and great players, at their best, on the best playing surface possible?

That said, since the NFL is, apparently, against the above, you have to think the playing conditions will factor into this game. When the weather is terrible, which its predicted to be, the passing game for both teams will be affected. Denver relies more heavily on its passing game, so I’ll give Seattle the edge here as well. 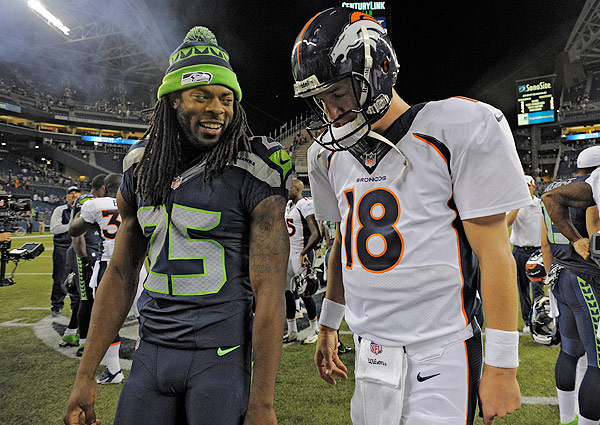 Not in terms of skill or anything. Sherman is good and all, but Manning is one of the best ever.

I’m purely ranking this on the guy I’d rather hang out with, and Sherman wins by a mile.

A lot was made of Sherman’s outburst after making the play that sealed the NFC Championship for his team. He apparently has a history with Michael Crabtree, and after making that play, with those stakes, that late in the game? Come on. If you aren’t emotional after that, you’re lame.

You know who wouldn’t be emotional after that? Peyton Manning.

The most emotional he’s ever been involved a rant about a kicker at the Pro Bowl (language VERY safe for work). That doesn’t compare at all. Since we’re all guessing anyway, I’m going with the guy with a personality. Not the football robot.

See Also:  Net Worth in the NFL

Regarding the controversy  surrounding Sherman and the “thug” label, Rembert Brown of Grantland handled this as well as it’s gonna be. Racists gonna racist. I’ll never get too upset about an anonymous idiot on the internet.

There you have it. Three unassailable reasons the Seahawks will win it all this year. Again, it’s impossible to be this bad at predictions without getting one right eventually. So you might as well bet the house on the Seahawks.

Who am I kidding? Sorry, Seahawks Fans!

Who you got in the game on Sunday? Were you upset about Sherman’s outburst or the subsequent reaction? Hit the comments and let me know!