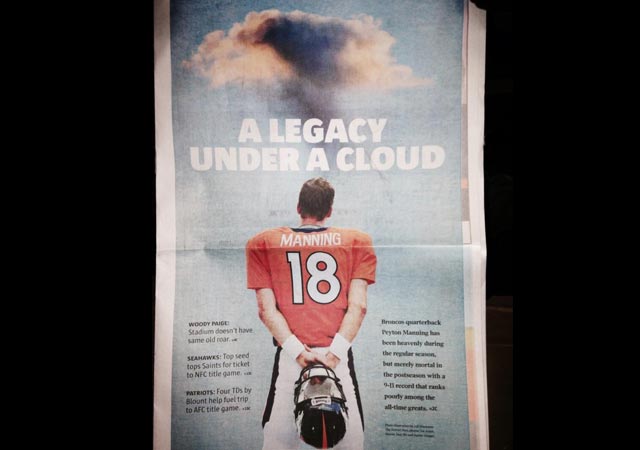 First of all, I finally got a prediction right(!!). I sometimes wish the internet had an erase function (don’t we all?), but I ended a long run of putting my foot in my mouth when the Seattle defense dominated the Super Bowl on Sunday.

As the massacre played out, and Seattle kept stretching its lead, I had a few thoughts:

First, “Wow, this is an ass kicking.”

Then, “Can we really consider Peyton Manning the greatest of all time with this on his resume?”

After letting things sink in over the past day, I thought about how silly it was of me to question Manning’s legacy with the result of just one game.

I’ve never been a big Manning fan. Not that I don’t recognize his greatness, but he has long been on my Sports Hate list for a few reasons: He’s coddled by the media. He has a lukewarm playoff record (11-12 overall, eight first-game losses). I spent three years in Indiana, and his fans are New-York-Knicks-level annoying. He’s always on my TV trying to sell me something.

Add it up, and you could say I’ve had my fill of Manning, Evil Manning, and the infamous Manning Face.

BUT, I’d trade Matt Stafford (the quarterback of my favorite team) for him in a second, and his overall numbers speak for themselves. He’s an unquestioned all-time great.

So why are respected journalists calling his legacy into question? How can you throw away a season that included the most passing yards ever, an MVP award (his fifth by the way, the most ever), and 55 freaking touchdowns because of a bad result against the league’s best defense? I think it speaks to the minds of sports fans.

I love Twitter, but one downside is that it gives idiots and the rest of us an equal platform. So this guy:

…gets to help shape the perception of Manning as much as anyone else. And this guy gets to spread that message to a lot more than 145 followers (sorry, Brian).

It’s madness. And somehow it all hinges on 60 minutes of football where a bad snap 12 seconds into the game can set the tone and a kickoff return can break the game open.

I won’t forgive Manning for leading his team to only eight points. That’s abysmal, and he deserves his share of the blame for that. But I won’t remove Peyton from the Greatest of All Time discussion either. He earned that over the course of 16 seasons. And it’s crazy to think otherwise because of one game.

How about you? Do you think Peyton’s lasting image is tarnished because of Sunday’s beat down? If he had won, would he be any closer to being the GOAT?

Oh by the way, #EsuranceSave30