Don’t Be Thirsty: Be Hard To Impress 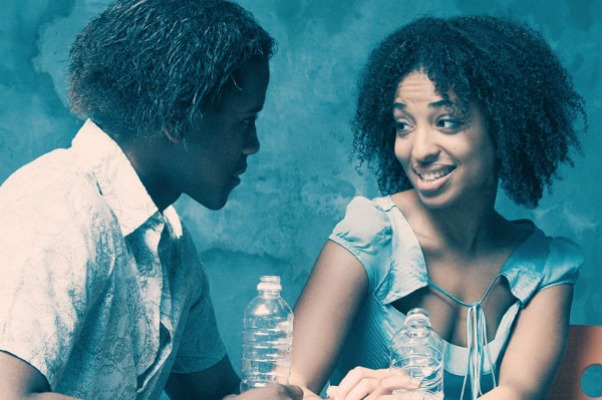 In part one: How A Man Can Avoid The Friend-Zone, I explained the upper hand a man could get by not being thirsty or in other words by being hard to impress. As I’ve stated in the past, women view a thirsty man in the same way that men view gold diggers.

On the flip side, women view a man that is hard to impress in the same way that a man would view a woman that is discriminating, loyal, carries herself well, and has respect for herself.

Typically when a woman is on the “prowl,” we play up our best attributes. We have our hair laid nicely, lipstick nicely accentuating the lips, and the outfit complementing the curves. Usually after pulling these old tricks out of the arsenal, we expect and are quite used to men just sopping it all up very quickly and predictably. Women pretty much know precisely how to look and what to highlight in order to get a certain reaction out of men and many men just gobble it up in a predictable way.

We expect men to:

2) reciprocating that eye contact and sustaining it so that they know the feeling is mutual.

At this point, we pretty much know that you’re going to make your way over to us very shortly after that. And when you do, we, admittedly, may kind of start feeling ourselves a little bit.

When we make that eye contact with you giving you the reassurance to proceed, we kind of get a power trip. We feel desired. We feel in control. We get an ego boost. We’ve captured you.

See Also:  Why Do Black People Tweet So Much?

So if after we capture you, you refuse to be captured right away and don’t follow the time line we have in our heads, it kind of blows our minds. It challenges our seduction skills. It makes you more elusive and therefore that much more desirable. After all, the most valuable things on earth aren’t easily accessible. They are harder to attain, and therefore makes us want them that much more.

(Important note: This technique only applies during the very early stages. This does NOT apply if you are seeing someone on the regular. This only applies shortly before you meet a woman and in the early stages when you are interacting with her sporadically. If you go too far with this technique and carry it on for too long, you could lose a good woman. It is all about balance.)

When we encounter a man that doesn’t fall for us -or anyone – so easily in the early stages, but is unusually hard to impress, it makes us feel like we have to step our games up. It’s a mind-fuck. It makes us more intrigued by you than we’d probably normally be. A man being hard to impress brings a competitive side out of women (Bonus: feeling competitive is another common cause for a spike in adrenaline or epinephrine). We’re asking ourselves “Did this dude seriously just pass all of this goodness up? He must be working with something special that I wasn’t readily aware of upon first seeing him.” It creates s sense of  suspense, spikes adrenaline, and subconsciously makes us want to impress you more.

Now, I know this is controversial and people will call this playing games but this is simply the way both men and women are built. We just don’t appreciate things that come too easily. We take their value for granted. This applies in the dating game and in other instances as well.

Men that have nailed the technique in this particular example would not be rude, they would just seem as if they’ve simply got caught up with other things first. Other women may be sending them signals too but they’re not worried about it. They’re doing them and are temporarily distracted. They’re not overly impressed by anyone. Why? Because they are Kings. And Kings don’t act like peasants. Kings aren’t thirsty. Kings aren’t easily impressed. They do things on their own time and are not easily swayed by anyone.

Only after a person has showed their rare value and has earned a King’s respect do they begin to appeal and cater to that person. In other words, kings only bow down to queens.

There are plenty of other detailed examples of ways in which a man could show that he’s hard to impress in a variety of settings and circumstances. But let’s reserve that for another time and perhaps another article.

There are men that have already figured out the general idea of this technique out on their own but don’t quite know how to execute it as effectively as they could.

Have you ever encountered a woman that tries to play hard to get but instead ends up coming off as very conceited and self-centered? Or a girl that you know is attracted to you but constantly swerves you while being mad flirty with all your boys? A lot of men come off this way too without realizing it.

They believe being hard to impress means acting like an over-exaggerated version of an alpha male. They act arrogant, aloof, disrespectful and overly-sexualized. Or in other words, they start acting like an asshole. Instead, of coming off as a boss, they come off as weak. Like they’re overcompensating for something. Intelligent women will quickly peep the game that they’re trying to play and be immediately turned off.

Instead, it is crucial that you are friendly, respectful, and gentlemanly. But remain unpredictable. Remain in control. Take just a little longer to make your way over to us. In general, don’t seem too thirsty or over-impressed by us or anyone. That way, when you do show your appreciation for what we bring to the table, we will appreciate it more. We know that that’s not an honor you afford to just anyone and you’ll have ensured yourself a spot outside of the friend zone.

previous Pillow Talk: How Many Partners is Too Many?
next Six Thoughtful Gestures To Make His/Her Valentine’s Day