Home Entertainment Pharrell’s G I R L Album Cover & The Truth About Colorism In The Black Community
Entertainment
Other Stuff We Like
Rules of Engagement
March 3, 2014 Jeff J. 101 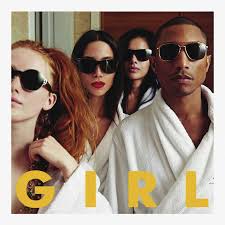 The anticipated release of “G I R L,” the first album by Pharrell Williams in eight years, has been met with open arms by the hip-hop community. It’s no secret that Skateboard P and his unique attributes of song, rap, and production have augmented the genre into an enjoyable and quality experience. This is the same gentleman whose tunes can have 50+ year old grannys jamming with the kids, and drug dealers nodding their heads in salutary approval. As “Happy” tears up the pop charts, it seemed like nothing could derail Pharrell’s momentum. That was, until he released the cover art for his project.

As seen above, the cover art depicts Pharrell with three women wearing shades and looking cooler than the other side of the pillow. The artwork seemed innocuous enough, but indeed there was controversy afoot. People (a majority of whom are black women) took to social media to voice their displeasure over the lack of variety of the women depicted on the cover. More specifically, some were upset that a black woman was nowhere to be found on the “G I R L” album cover.

I didn’t fully invest myself in dissecting the controversy in the beginning. “75% of the people complaining will probably bootleg this album anyway,” I thought to myself. Once the firestorm of outrage bubbled however, I decided to really analyze what occurred. I wanted to take a look at it from the black woman’s perspective. This has been a demographic who’s been a victim of sensationalism in the media for far too long. They have been baited into arguments, and challenged anytime they have an opinion because “they’re always mad about something.” This troubling narrative makes black women a target for incessant ridicule, even from black men, so I can understand the sensitivity this uproar may have caused.

I looked at Pharrell and wondered whether the European standard of beauty crept into his psyche and exhibited itself in the promotion for his album. I also wanted to look at Pharrell objectively and I wondered if he had a “light is right” track record in the visuals for his music. I didn’t have to look too far for this answer, as Trent Clark from HipHopWired compiled a list of examples where Pharrell has worked with brown(er) skinned women. I gleaned 3 things from this list:

Pharrell, who’s been pretty squeaky clean his entire career, commented on the outrage on “The Breakfast Club” on Power 105.1 NYC. He offered the following:

“What really disappointed me is that man, they jumped the gun, because the one I’m standing closest to is black.”

So there was black representation on the cover after all. Interesting. He later goes onto say:

“I understand that plight, you know? My dad is a dark-skinned man! My mom is a black woman that is a huge part of my business. My business is run by a black woman and I’m married to a black woman, so what are y’all talkin’ about?!”

See Also:  15 Tips on Cheating and Managing Your Mistresses

Even after this interview shed light (no pun) on the “G I R L” cover, people were still outraged that the woman in question wasn’t darker. They skipped over the fact that their initial accusations held no merit, and skipped to the “lesser crime” of our black sisters not being dark enough for their liking. Whenever this skin color debate rages on social media, we tend to identify the disease and not the symptoms. We forego all wisdom and understanding in the hopes of conveying our point. We should identify the root cause of these color issues. Pharrell alludes to the issues illuminated by this album cover debate, and a few ugly truths among people of color:

I remember having a conversation with a few women about the light-skinned / dark-skinned saga. We talked about “preferences” and how they were developed and applied. They took issue with black men having a preference for light-skinned women. I asked them, “What’s the first thing that comes to your mind when you see a light-skinned black woman with a black man of any complexion?” Their collective answer was one word, spoken with the unison of instruments playing at the Philharmonic Orchestra:

I won’t front… Instinctively, I thought that too. But it doesn’t change the fact that we indirectly put down light-skinned women when we chastise black men for dating them. Who are light-skinned black women supposed to date to appease the overall black community? If they date outside their race, they get praise for not conforming to “unsupportive” black men who put other races on a pedestal. If they date within their race, they’re looked upon as a symbolic effect of colorism on black men. This doesn’t alleviate blame on black men who SOLELY date lighter women because they think “light is right,” but we have to see the other side of the picture too, and how this premise can affect light brown women. It’s funny how some black men’s “preference” for light-skinned women is always met with ridicule, yet when darker women communicated their “preference” for darker women on the “G I R L” cover, they were upset that their premise was challenged!

Let’s not act as though light-skinned blacks don’t have certain stigmas either. If I asked black people of all complexions what’s a stereotype associated with light skinned people, they would probably chuckle before rattling off their list. We all know them. They include:

The list above is no different than the stereotypes associated with our darker brothers and sisters:

The list above is no different than the stereotypes associated with our darker brothers and sisters:

-->
See Also:  20 Ways Black People Act When They Go Out Versus Their Counterparts

Ugly Truth #2: Darker-skinned blacks feel the oppression more than light-skinned, so they overcompensate

Black people suffer from so much ridicule in the media, in society, and in general that it becomes overwhelming. We see our young black boys continue to be murdered without just repercussions. We are constantly reminded of things we can’t do as black people. This extends to art and entertainment. Black women of darker shades get discriminated upon, so black people will feel compelled to highlight women of color immensely in order to compensate for the racist and prejudicial views. This is why black people will voice their opinions when SNL didn’t have black female representation on their show. While I agree with promoting our own, especially when other inside and out of the race will look to downplay, I see the other side of the spectrum, where lighter blacks will get diminished in order to place darker-skinned blacks on a higher pedestal. It almost feels as if lighter-skinned blacks are seen as necessary collateral damage if it means advancing blacks in general and promoting our darker brethren. Extreme ideals of any kind can be problematic and further lead to division among African Americans, and blacks around the world. Once again, this isn’t EVERYONE, but it’s definitely prevalent.

The larger issue at hand is the notion that “dark-skinned black isn’t the good type of black.” This has damaged our community for centuries. You see it more prevalent in media, TV, and movies than ever before. Maybe the problem is that lighter-skinned blacks felt a certain level of comfort knowing that we didn’t receive as much detrimental treatment from the majority. Maybe we should be even more vocal than our darker skinned black family so that we can make a stronger impact. That ugly base of thought that the darker the skin, the less you’re accepted needs to be abolished. The best way to change is to work within and demand change from all levels.

Those in modelling and fashion need to fight so more black men and women representing the entire diaspora of complexions are placed at the forefront. Actors need to fight so that casting black actors in “white roles” isn’t seen as an issue to the majority, as actors should be judged on their skill not their race. Advertisers and marketing professionals need to see the value in promoting a more 21st century representation of American cultures and families (which include all races) in their print and digital campaigns. in order for these changes to occur we have to be united. We should acknowledge our internal colorism and external prejudice, while still fighting to promote our people, regardless of how dark or light we look!

See Also:  Black Names, Living Away from Home, and More

Do I think black women and blacks in general have a right to feel like Pharrell should’ve had darker women on the cover? Yes they have that right. I just think it’s silly to argue over an artform when a black artist hasn’t been accused of discriminating or neglecting the darker shades of his race before. I didn’t like how it grew into a firestorm when Pharrell got attacked, and we acted in a divisive manner. We should stand as one black community to defend against it, and not let it divide us before we take on larger issues. Colorism is a problem no matter which side of the complexion scale you sit. We need to do better and not ostracize our lighter or darker black family in the hopes of moving forward.

-->
View as one page
previous Men Just Wanna Have Fun
next SBM Sports: Is This Cinderella's Year in March Madness?