SBM Sports: Is This Cinderella’s Year in March Madness? 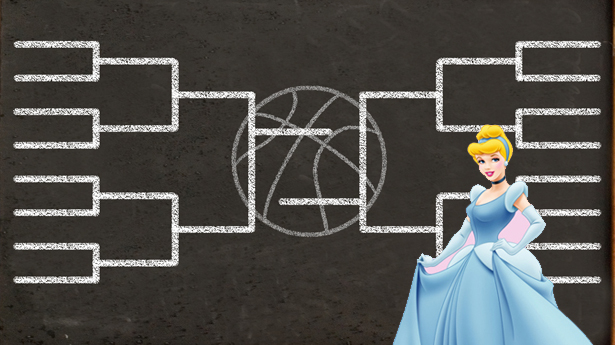 We are officially less than two weeks away from my favorite Sports Holiday of the year. Selection Sunday is March 16th, and we’ll know who’s in the NCAA Tournament, who was snubbed, and who to advance in our office brackets.

I can assure you my picks for the Final Four will be changing. We can get to my terrible picks in a few weeks.

For now, I have to wonder, is this the year a “mid-major” program makes a serious run at the title? The major teams seem more vulnerable than ever. Just last weekend, 12 (TWELVE!) of the nation’s Top 25 teams lost to unranked or lower-ranked teams. That’s, like…almost half.

Last week’s results were a microcosm of the entire season. More non-traditional powers than ever spent almost the entire season ranked in the Top 25. That used to be the domain of teams from the “Big 6” conferences, a term borrowed from college football referring to the six biggest conferences that get first dibs at the BCS Bowl Games. In the past few years, schools changed conferences looking for a better shot at the multimillion dollar payouts that come from college football’s biggest games.

Ironically, this movement may have opened the door for smaller schools in college basketball.

For example, the best football teams from the Big East jumped ship to other conferences. The remaining schools, desperate to keep the Big East intact, reached out to Creighton, a school with some basketball pedigree. Now in a major conference, Creighton had an opportunity to schedule better opponents and get on national TV. They took advantage of the platform, and are currently ranked #13.

To get an idea of how a similar domino effect happened to multiple teams, check out this super confusing chart (which is actually a little dated, there have been MORE moves): 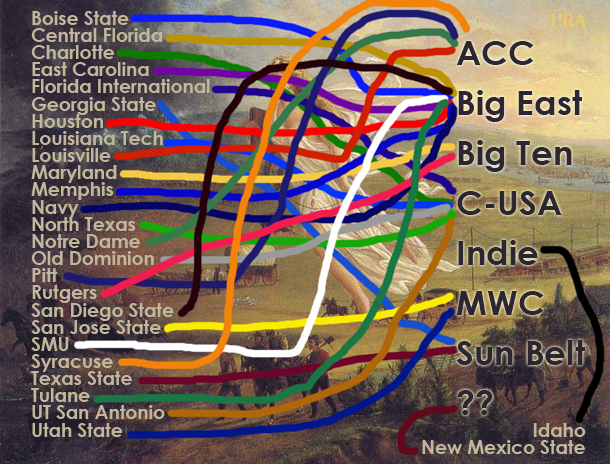 Basically, no one is anywhere anymore. The moves led to a consolidation of football schools, which opened the door for basketball schools like Creighton to take advantage.

Anyway, now that we have so many new schools in the running for a title, and a weekend’s worth of games proving again that anything can happen in a one-game playoff, it’s fair to wonder if one of them can make a title run. Here’s a rundown of the Cinderellas-you-may-not-have-heard-of:

The Shockers finished their regular season at 31-0. They were in the Final Four last year, and are led by a guy named Cleanthony Early. A lot to like about this team. I’m partial to any tournament team with experience, and they proved last year they can run with any team in the country.

Led by Steve Fisher, the man who took my beloved Michigan Wolverines to their only title, the Aztecs have been a mid-major threat for a few years now, though they haven’t played up to their ranking in the tournament (losing to Dunk City last year). They beat Kansas and Creighton this year, so they are a threat again, but I’ll doubt them until they break through.

The Blue Jays easily have the worst mascot in college sports right now. Gotta discount them for that. They do have Doug McDermott, the probable National Player of the Year though. That will probably factor more into their postseason success. Creighton has a solid team, but McDermott will take them as far as they go, much like the Davidson teams with Steph Curry.

The Billikens win behind a tough defense that rarely allows more than 70 points per game. The problem is they hardly score 70 themselves. In fact, their 206th in the country in that category. Teams will have trouble adjusting to their defense, but can they score enough to win six tournament games in a row?

Hall of Famer Larry Brown coaches this team, so you know they’ll be solid. Tomorrow’s game against Louisville will answer a lot of questions about how serious to take their title chances.

The Lobos are another team that has had some success in recent years. I tend to think their ranking has more to do with the weak overall field than their talent. They are no title contender.

…and this list doesn’t even mention teams that have been in and out of the rankings like: VCU, UMASS, and Gonzaga.

So to the main question: can one of these Cinderellas become a national champion? I think so. The traditional teams are just flawed enough for one of these teams to take advantage. My money would be on Wichita State, but I’d love to see Creighton win it all behind McDermott.

What do you think? Will the “big” schools be upset come March? Or will it be more of the same once the brackets are set? Do you want to see a few of these schools make it through to the Final Four?