Are the Miami Heat Giving Us Reasons to Doubt Them Again? 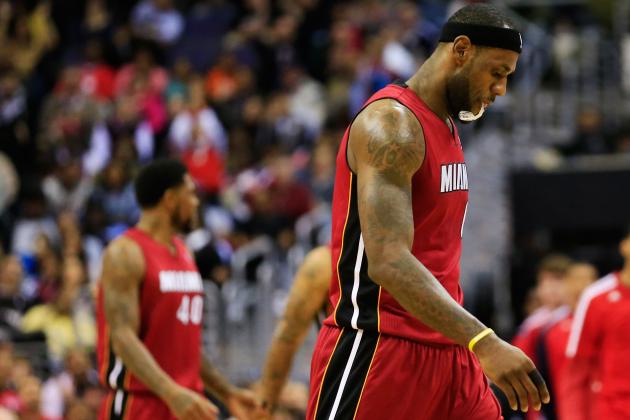 When LeBron James hosted The Decision in 2010, he instantly became the most hated player in the NBA. Except for that one person who randomly clapped when he announced his decision, pretty much everyone else felt he had taken a shortcut to basketball royalty.

In the four years since, James and the Heat endured criticism from the media and Twitter. In the process, the Heat did the impossible: they made the entire NBA regular season entertaining for the casual fan. Diehards have always been onboard, but rooting against James became its own sport for everyone with a passing interest in basketball and a Twitter account.

The hate came 140 characters at a time, in the form of genuine criticism, reckless Kobe comparisons, and hilarious memes. Despite it all, the Heat reached the Finals three straight times, eventually earning the respect of most NBA fans. A lot of Black women still seem to hate the Heat…but that’s for another post.

In the process of conquering the NBA these past two years, the Heat relegated the regular season to its usual place in the sports world. Fans are back to the usual, “I’m here for Thursday and Sunday games, otherwise wake me up when the playoffs start.”

And then the Heat lost three straight games.

Now, out of nowhere, the regular season is interesting again just as teams are gearing up for the playoffs. Instead of rounding into playoff form, the Heat are raising questions. Here are three they need to answer as the playoffs start in just five weeks(!!!).

Can Dwyane Wade’s knees stay glued together for the entire playoff run?

To the extreme disappointment of Wade’s fantasy basketball owners (used my first pick on that fool), Wade has been taking it easy so far this season. He sat out a quarter of the team’s games this season to rest his creaky knees.

Chronic injuries have slowed Wade in years past around this time. He even missed a playoff game last season (against the horrible Milwaukee Bucks, but still). This year, the Heat are periodically resting Wade with the hope that he’ll be fresher for the playoffs. Despite lower overall numbers, he’s as efficient as ever when he does play, so the approach seems to be working.

But what if this needs-time-off Wade can’t turn it on now that the season’s most important games are coming up?

Aging is a slow process, and Flash may be turning into Flashes (copyright Jalen Rose) before our eyes. The Heat only need Wade to be great for 14 games (the Eastern Conference and NBA Finals), but as we saw over the last three games, trying to bottle Flash may not be enough against the league’s best teams.

Is LeBron James human after all?

First, we saw James bleed his own blood. He still finished that play, but carrying the “other guys” on the Heat and a not-quite-the-same Dwyane Wade could be taking its toll. 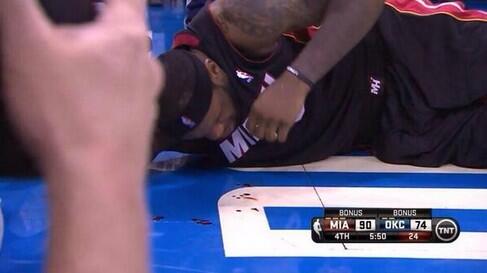 These are effort stats. Are these declines the signs of measured effort or the stress of carrying Wade’s knees and the rest of the Heat squad? The latter would doom Miami in a prolonged series against (let’s be honest) Indiana or in the Finals.

Weird stat: James’ 17 blocks are only a handful more than Stephen Curry. I think James is poised for a huge playoff performance, but there’s a reason no team has gone to the Finals four-straight times since the 80’s. It’s hard to be this good for years on end.

Can the role players step up?

Ray Allen is shooting his worst three point percentage since ’98.

Shane Battier has apparently forgotten how to play basketball.

Mike Miller is a Memphis Grizzly.

These are the three players who stepped up in key playoff moments for the Heat the past two years. The Heat brought in Michael Beasley and Greg Oden to help plug these gaps. Trust them if you want to, but the Heat have opened up some doubt in my mind.

As of this writing, the Heat are set to play the Washington Wizards. Even if they win by 50, there are some legitimate questions about the Heat’s chances to three peat.

What do you think? Are the Heat still the team to beat in the East? Are they your favorites to win the title? Let’s bask in NBA Playoff time in the comments!