Home Empowerment Why That THOT Belongs To All of Us and The Need to Get Rid of It
Empowerment
Featured
Women
March 28, 2014 Dr. J 14 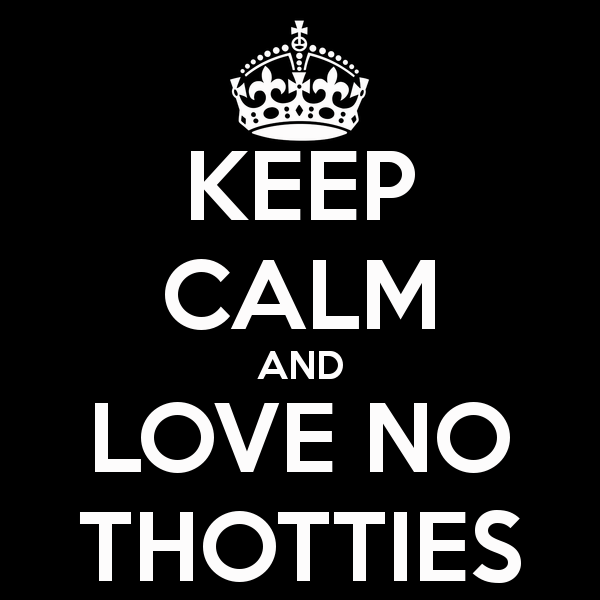 Have you ever really sat and thought about society? I made an observation not too long ago that we’d reached a point where as a society we were in a good place but we were also in a really bad place. You see, at this point everybody should feel encouraged to express themselves, their beliefs and thoughts without feeling persecuted or discriminated against. That’s all well and good but every action has a reaction. There’s a reason why we have things such as cause and effect. I guess I should clarify that this really pertains to the factions of genders that ruin the image of the entire gender because they’ve been given the freedom to act out.

This is two-fold but we have things such as word counts that prevent me from doing that all in one post so I’ll do it in two. That means preemptively this post is ladies first and then we’ll come back to the fellas in another post. I don’t want to imply that only women need to fix this but I’m going to give a male perspective on how I think a faction of women are ruining things for everyone.

Stop being ratchet. Stop being okay with being ratchet. There is no such thing as ironically ratchet or turning on and turning off your ratchet, just stop being ratchet altogether. We can no longer allow our women to be viewed this way. It has to stop. The reason it has to stop is because it limits women in so many ways. People see ratchet in the clubs, they see ratchet on the radio waves, they see ratchet on twitter and then they see ratchet on TV. The second anyone does anything remotely close to the way those people act they are labeled “ratchet.” That means when a woman takes offense to disrespect from another woman and just so happens to raise her voice; she’s assumed to be ratchet. Does that make sense? You can’t raise your voice or you’ll be called “ratchet”? It doesn’t but that is what happens when you share characteristics with a ratchet.

See Also:  The Curious Case Of The Fragile Male Ego

This was just pathetic… and partial motivation behind this post. Somebody save this thottie.

The next thing we have to do is get rid of all THOTs… and stop taking pride in being a THOT. I saw it on Twitter one day and it hasn’t stopped; it’s this feeling that it is cool to be called a THOT. If you don’t know what a THOT is, click here. Of course it’s funny to guys but you don’t want women to be considered “funny” to guys, you want to be taken seriously. You can extend this need to get rid of THOTs to a whole host of references for women that women empower themselves with that are inherently negative. You have to get rid of women who don’t mind being loose and known for being loose and you have to get rid of the women who aren’t but don’t think the reference is all that bad. If I had to equate this in business terms, it’s bad PR or horrible brand management.

Lastly, be cognizant of what selling sex for fast cash does for your gender’s image. Listen, I’m not going to tell you that deciding that all you want to be known for is a fat ass or that you don’t mind being a groupie if it gets you a few stacks here and there. I won’t tell you that you shouldn’t do that because that’s your choice. What I will tell you to do (because of some take pride in that life) is that it makes it hard on the rest of your gender when you do because you are the most popular. I have this theory around the Tea Party and how I tell people that the entire Republican Party isn’t like that, but because they’re the loudest in the room everyone thinks that is what the whole party is about. That’s what happens when women sell sex for fast cash. Whether you’re a stripper, selfie addict, groupie, reality TV star or any of the liking people see you more than they see the regular 9-5 woman who is out here choosing to go the other route. What that ends up doing to their self-esteem is making them feel like they have to do that too in order to get a man’s attention, to get anyone’s attention.

I guess the point that I’m getting to is that nobody pays attention to the “regular” women. I use that term with caution because I’d hate to use the word “regular” to describe the people who are doing their best to uphold a great image and reputation for women. They aren’t handing out reality TV shows for single working mothers, they actually hand out reality shows for single, not working, mothers who almost never see their kids. They don’t want to do a reality show about the group of young women who can go out, dress appropriately and have a good time without it ending in broken glass and a floor full of weave. They just don’t want to do that. That’s reason I stopped watching it because I felt like if I wanted to get an idea of who women were, I best not use TV as a reference point. I would think of them as ratchet thotties who were willing to do anything for a dollar. I best find the ones in real life because those are going to be the only ones that resemble something worth desiring. I think it goes back to when people say not to worry about what people say about you. That’s all well and good but maybe you need to be worried about what people say about others like you because it has an effect on what they say about you too.