After the most exciting NCAA Tournament since…last season, we finally arrived at the Final Four. Since no one predicted these teams, except Florida, would get here (shout out to Warren Buffet), there’s no way anyone knows who will actually win.

Since I’m terrible at predictions, I won’t guess either.

Instead, I’ll make sure I’m right. Here are the reasons every team will win it all next Monday:

Why Kentucky will win the championship –

Because they apparently figured it out at the perfect time.

Instead, the Wildcats were an 8-seed, stuck in a bracket with three(!!) of last year’s Final Four. So what did they do? Beat each of those teams in succession of course.

Instead of playing like overmatched freshmen, everything has gelled nicely.

Despite real concerns about his pro prospects, Julius Randle has turned back into a beast. He has double doubles in every tournament game, and was (stubbornly) playing against triple teams against Michigan.

The Harrison Twins are shooting (Aaron) and assisting (Andrew).

See Also:  So About This Hairline....

All in all, the team is playing as well as it has all season. Kentucky will win because they forgot how to lose. Knowshon Moreno tears for my Michigan Wolverines.

Why Florida will win the championship –

Because they are better than you realize.

Did you know Florida has made four straight Elite Eights? Of course not. No one remembers the team that loses in that round, even if they do it three straight times. 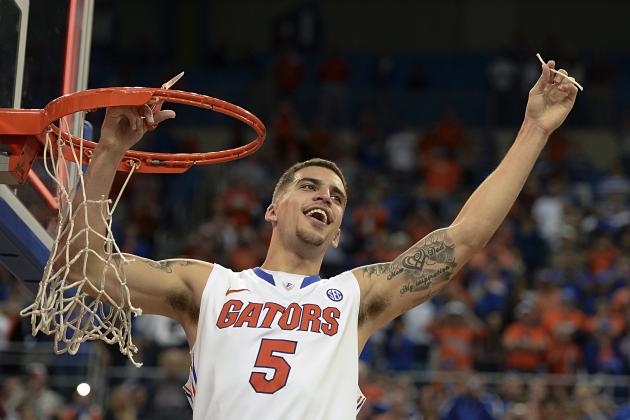 This is a team that has been consistent, and they’ve barely had to sweat thus far in the tournament.

Florida ran through Albany, Pittsburgh, UCLA, and Dayton by an average of over 12 points a game. Compared to the road Kentucky took to the Final Four, Florida has done little more than show up.

The Gators are on a 29-game win streak, so it’s safe to say they are in a comfort zone. They have a great defense and a balanced offense with four players in double digits. Even though they lost by one to UCONN in December (their last loss by the way), they are a worthy favorite to win it all.

Why UCONN will win the championship –

Speaking of the Huskies, UCONN will win the championship because Shabazz Napier has become Kemba Walker, the point guard who led the team to a championship in 2011.

Napier has put the team on his back, drawing the defense his wayso the rest of the team can thrive.

Napier shredded Michigan State on Sunday from outside and on drives to the rim. When the Huskies went on the clinching run, it was his five points, on a stepback jumper and several free throws, that helped break the game open.

When UCONN wins it all, it will be because of the second coming of Kemba Walker.

Why Wisconsin will win the championship –

Because this is a Badger team with…an offense?

Wisconsin has been known for defense and white guys since forever. The Badgers have always played a prototypical Big Ten game: set shots, elbows, and solid, solid screens. It was truly terrible to watch.

Now, though the Badgers still feature a bunch of white guys, almost none of them have buzz cuts, and they have actual athletes that can run, cut, jump, and even dunk. They’re damn near entertaining!

Wisconsin will win it all because they have the best of both worlds. They still play great defense, except this year they back it up with an offense that is not puke-inducing.

There you have it. Undeniable reasons why every team will win the championship.

Since I’m a man, I must give my actual prediction. I have Florida beating Kentucky on Monday. Since I’m sure I’ll be wrong, I’ll spare you my reasons why.

Who do you have winning it all? Did you guess any more than one of the Final Four teams? Will need a screenshot of your bracket as proof of course.

Get your Negrodamus (or Blancodamus I guess) on in the comments!