Friends with Benefits Can Work. Here’s Why… 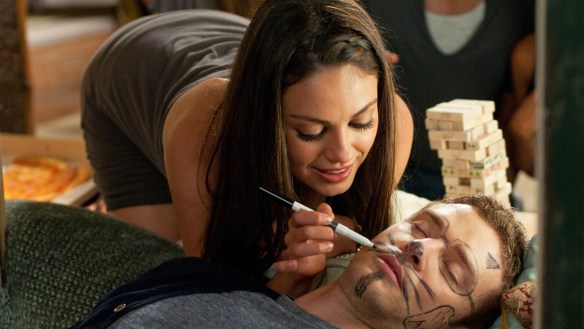 If you’re lucky, you’re f*cking someone you adore. You’re in a committed and monogamous relationship with this person and you can see marriage in the near or distant future. But if you’re not “lucky” right now — if you haven’t drunkenly stumbled, or gracefully sashayed into “the one” yet (and I say that with just the slightest snicker), you may be f*cking one of your friends.

The friend-with-benefits is becoming a common (non)romantic situationship and I would argue, it is its own strange, off-brand of auspicious.

As emotionally risky as consistently sleeping with someone you are blatantly disconnected from can be, 20 and 30-somethings are taking this plunge daily, weekly, and monthly in order to fulfill basic sexual desires.

How could a potentially hazardous but sexually fulfilling situationship with a person you kinda-like in a platonic way ever, ever, everrrr be a good thing?

Well, one of several young professionals I spoke to actually said doing a friend helped her maintain a healthy, hormonal balance. And experts say this is a scientifically-proven reality. Safe sex releases hormones, adrenaline and is a good form of exercise.

…And, apparently, we’re not mature enough to be celibate and wait for a soulmate to come along the way our parents and grandparents did.

Even though we are more interested in achieving personal and career goals before settling down then they were, five and ten years of jump-offs can add up if you’re sharply opposed to long-term celibacy the way our generation seems to be.

See Also:  Do I Know God? How About Do You Know Me?

That being said, the “situationship” is not only a reality but a commodity.

Proof of this is in the conversations taking place on boozy Scandal  Thursdays and in shoe-shopping marathons, after bar crawls during March Madness, and Sunday afternoons at the gym.

I’ve had my share of conversations with friends about how finding one of these fellas is more of a challenge than finding a mate. And while that may be a gross exaggeration, cut buddy falls right beneath boyfriend in my book.

The heart of the success of the friendship-with-benefits is precariously balanced between these platonic emotions and satisfaction with the overall situation. The minute one of those things goes awry, it’s over.

It’s really f*cking easy for all this fun to turn into a devastating and dirty breakup– just like a real relationship– as soon as natural, but unreciprocated feelings start to bubble up.

For an anonymous 27-year-old journalist, the relationship became a ping pong match of unrequited feelings. A young accountant from NYC’s situationship ended with a bottle-throwing blowup.

Often, drama like this is an occupational hazard–everyone has experienced some version of these stories. Situation-shattering conflict is often unavoidable, regardless of the spoken, or unspoken, rules of the relationship.

Successful friendships-with-benefits, do, in fact, require a level of compassion. You really have to be good friends, for it to work, while simultaneously being so starkly different that it would never work, for real. You have to be able to sit down at IHOP with her after a long night and enjoy her company enough to share a meal, but not a memory. And that’s an almost impossible dynamic to hold on to for any length of time.

After a year of weekly breakfasts, or seven months of scheduled Saturday night booty calls, somebody is almost guaranteed to get attached.

And though Black Hollywood, Steve Harvey and an assortment of other sexperts may try to propagate the load that it’s emotional women who find themselves yearning for men who don’t yearn for them, I know from being on the other side of this conundrum, that’s not the truth.

The same man I interviewed whose situationship made a tearful exit after chucking a bottle at him said that despite an overall disinterest in affection from a cut buddy, (his exact description was that it would make him feel “annoyed” and “guilty”) he would get into a committed relationship with the right woman.

Others I interviewed were either committed and unwed, open to, or seeking monogamy.

Neither women nor men would turn real love away, even if they were busy knocking boots with a long-term friend.

But how is that possible, when the very basis for a friendship-with-benefits is unhappiness?

How can we maintain successful situationships when we are each so painfully aware we’d rather be doing the real thing with someone else?

…And when there are a slew of unpleasant emotions– like deal-shattering attachment, jealousy, anger and unfulfillment– is it worth it to keep doing this to each other?

I guess I’ll know for sure when it stops working for me.

Celeste Little is a New York City journalist, Syracuse University alumna (GO ORANGE!) and the founder of www.ocaelo.com, an arts and culture website for young “metropolitans.” She writes about art, culture, urban issues and loves analyzing relationships — even her own. Follow her on Twitter at @ocaelo.

previous Picky or Patient: What Type of Dater Are You?
next How Insecurity Keeps You From Being Great - Pharrell Expands on Album Cover