Home Around the Web Is Affirmative Action On The Way Out?
Around the Web
Hot Topics
Other Stuff We Like
April 23, 2014 Dr. J 20

Is Affirmative Action On The Way Out? 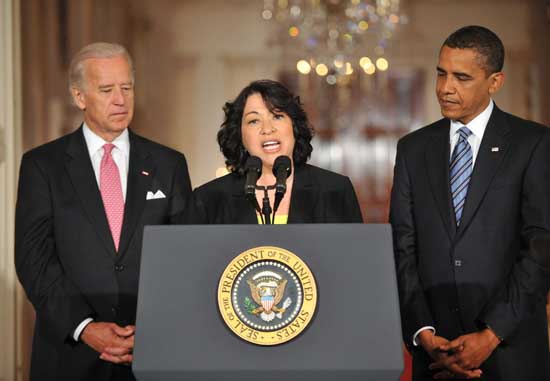 Yesterday, the US Supreme Court decided that Michigan could do away with considering race in college admissions. There are arguments to be had on either side and I think that as African Americans we need to be careful not to react without knowing all the facts. That said, what alarmed me the most was the drastically different opinions between Justices Sotomayor and Roberts. It concludes with a quote from a Michigan attorney which brings it all together.

“This refusal to accept the stark reality that race matters is regrettable,” Sotomayor wrote. “The way to stop discrimination on the basis of race is to speak openly and candidly on the subject of race, and to apply the Constitution with eyes open to the unfortunate effects of centuries of racial discrimination.”

She added: “As members of the judiciary tasked with intervening to carry out the guarantee of equal protection, we ought not sit back and wish away, rather than confront, the racial inequality that exists in our society.”

Roberts responded with a short, sharp statement of his own.

“To disagree with the dissent’s views on the costs and benefits of racial preferences is not to ‘wish away, rather than confront’ racial inequality,” Roberts wrote.

“People can disagree in good faith on this issue, but it similarly does more harm than good to question the openness and candor of those on either side of the debate.”

People can glean what they want from those two opposite sides of the fence but I think this last quote brought it together and shows the glaring flaw in our Supreme Court.

Justices are not appointed by presidents “unless they have strong opinions,” said Michigan Attorney General Bill Schuette (R). “I think there are strong passions on each side of this argument.”

I’m interested to hear all of your thoughts on this conversation as it is pressing to the community in which this blog operates. Is there any room for a conversation or is this a case of when bigots are allowed to preside over issues? You can check out the full article on Sotomayor’s dissent over at the WashPost.

tags: affirmative action chief justice roberts sonia sotomayor Supreme Court
previous Thunder Up! How the OKC Thunder Will Win the NBA Championship
next Things Women Need in a Relationship, the Future of Sidechicking, and More