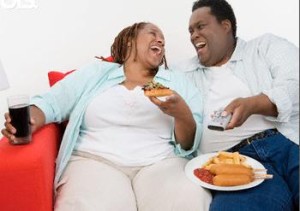 We all want honesty. Nobody wants to be with someone who’s walking around with a bunch of secrets. Usually when you think of someone you’re with being dishonest, it means they’re keeping things from you that may affect your relationship like they’re married and have 2 kids for example. But how often do you think about the things that they keep from you that don’t necessarily affect the relationship, and aren’t harmful, but instead could just be detrimental to your image? I’ve always wondered at what point is your other half semi responsible for your image.

The oh, so popular yet touchy subject of weight is the easiest place to start. New couples usually go through that new period where all they do is go out to eat and lay up with each other. This lasts at least a full season, and when it’s over you have nothing but additional lbs. to show for it. So now what? Who says something first? I mean, it’s not like neither of you noticed the other has gained weight, but who’s going to have the balls to speak up? You may be thinking how do I tell my girlfriend she gained weight? Men know better, and women don’t really want to deal with a damaged male ego. The result? A round couple, going into a new season. I know, it’s hard but this is a situation where honesty is the best policy, or is it?

When is it appropriate to tell someone you’re gaining weight, or you’re letting yourself go? Is it your place? Those are the questions I have. In a relationship you always want your mate to be attracted to you, but there is a fine line between hurt feelings and doing a good deed. Let’s be for real. I know we’ve all been in situations where we’ve wanted to speak up about something, but didn’t know how to say it. It sits in the back of your mind and festers. You never speak up and both of you are left with an unresolved issue. One person is aware and the other, not so much.

This qualm isn’t true of only romantic relationships, but friendships too. How do you tell your homegirl that no, her outfit does not look good and her size 6 is really a thot 6 and not a true 6; in other words, up your dress size. I know I’ve jokingly blamed the friends for letting some chic come out the house looking crazy. I guess it’s not really their responsibility though.  If your boy is balding, and continues to go get a lining, at what point can you suggest him just cutting it off and going bald? It’s hard. You want to be honest in all your relationships, but you don’t want to hurt the people closest to you. It’s not too often that we feel comfortable having those “come to Jesus” moments with our boos and friends in fear of damaging their “self” esteem. [queue Kat Williams]

You also have to think about if it’s your place or not. People are quick to say that everyone is entitled to their opinion. You can look how you want to look, but understand there are consequences. We should be able to count on our friends to be honest, but that doesn’t always happen. Even though we look in the mirror everyday, we don’t always see ourselves as others see us, and perception is reality.

See Also:  How Does a Man Approach a Newly Single Woman?

We are all offenders, but we are all human. I don’t think [most] people want to hurt anyone’s feelings, but what are some ways you can address issues that usually go untouched in fear of being offensive? Do you speak up, or hold your peace? What say you?

previous #YesAllWomen and #AllMenCan Takeover Twitter and Spark Conversation
next Are These Women* Loyal? Some Men Sure Aren't.