You Want a Ring? Play Your Position. 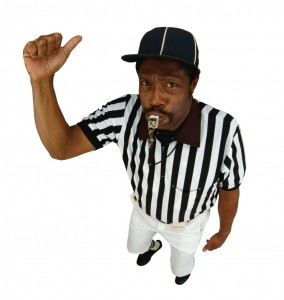 At one time or another dating was easy. It was about going out with someone and having fun. There was no pressure when it came to dating. But nowadays, it seems as if women are really putting the pressure on these men and expecting some type of committed relationship after a couple of months of dating. Even though there are different situations when it comes to dating, one thing’s for sure: many women tend to make the same mistake. And since most men think in sports terms when it comes to us women, I thought I’d do the same. So I’m breaking down my opinion on common instances that come up while dating a guy and how women mess things up from a sports aspect.

At some point, the question of why each of you are single comes up. He lets you know he’s single by choice, not ready for the responsibility of a girlfriend, or he’s still working on himself. Naturally women accept these answers and agree with him that they too are doing the same thing and not tripping about a relationship – FOUL! If you know that’s not how you feel, why agree? Why not let him know your expectations? When you agree with him and add the extra “I’m not looking to get into a relationship either,” you’ve basically agreed to be friends until his further notice.

Sometimes women begin to formulate the thought that she can change him – TECHNICAL FOUL! When will women learn that you can’t change a man? A man makes the change for himself. The only thing a woman can change about a man is his style of dress and the décor of his living quarters and that’s as close as you’re going to get. In your eyes, you can be the best thing that came into his life, but if he’s not ready to settle down he’s not going to. If anything, he’ll have the luxury of having a friend doing girlfriend-like duties.

Months have passed and things are going well then something clicks and for whatever reason a woman needs more. All of a sudden you need a title to justify this relationship. So you take it upon yourself to do the top 3 offenses. Offense #1 – you ask him “what is this” “what are we doing” and “where do you see us?” Offense #2 – you express to him now that you don’t date to date and you date with purpose and you don’t want to feel like you’re wasting your time. Offense #3- you tell him you stopped dealing with other guys for and/or because of him – EJECTED!

Being ejected is simple, it just means while playing in the dating game,  you demonstrated serious offenses and must be sent to the locker room to think about what you did. Doesn’t mean that you won’t play in future games (continue dating him)  but you might not get as much playing time. Basically it might not be as good as it was because he may not be on the same page as you and now he knows you want a relationship.

As stated before there are all types of different situations when it comes to dating. I do think that a lot of women get ahead of themselves and cause their own hurt and pain. We get caught in our feelings and let feelings get the best of us and the situation. Learn to suppress your feelings with a thing called reality. The reality is you may not end up with that person. When first getting to know him express how you feel about dating and if he’s not on board, no love lost. Changing a man is not going to happen so quit trying!

See Also:  How Do You Avoid Being 'Friends With Benefits'

You must learn to be quiet. If he treats you right without the title, stop stressing about it and stop pressing him about it. You don’t need it to justify your happiness. Women have to understand throughout all of this you have a choice: stay or go. The beautiful part about dating is you’re just dating. Therefore you have no obligation to this person which means you can cut ties at any time.

I honestly feel that men appreciate and respond better to a woman who isn’t waiting on them and who doesn’t feel like she’s wasting her time. This is the woman that rarely presses the relationship talk, but if she does she knows how to deliver it. This is the woman that doesn’t question his whereabouts, why he hasn’t called, and why they don’t spend a lot of time together (nor blow up his phone). This is the woman that has her own thing going on; it’s called her own life. I really do believe that the woman who plays her position will have a better chance of coming out on top with that championship title and ring that every woman eventually wants.

Southern California native, currently residing outside of the Los Angeles area. 33 years old single and kid less just living the life that I love. I work full time, I work part time and I go to school part time let’s just say everyday I’m hustlyn….I used to be a part of an all woman online radio station called Devyns Playground, so I’m use to discussing my opinion with men and women from all different backgrounds. I’m very neutral when it comes to certain discussion I find myself agreeing with men and sometimes I stand firm with my ladies. There’s nothing wrong with playing on both sides of the fence that’s how you learn.
twitter.com/hustlyndiva | [email protected]