Why We Aren’t Standing Out and Fitting In 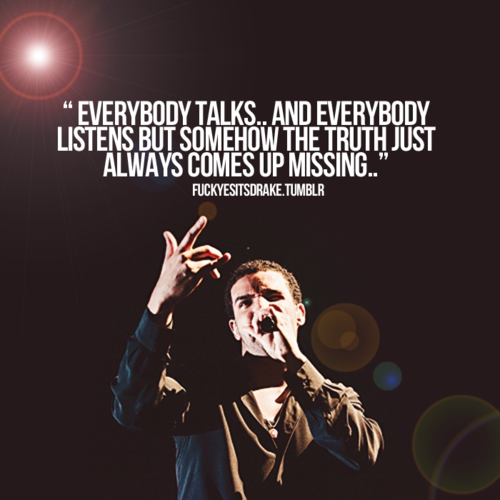 In his song, “Say What’s Real,” Drake makes a statement that could double as the motto or at least the recurring theme in the ideology of Gen-Y. He raps,“Don’t ever forget the moment you began to doubt, transitioning from fitting in to standing out.”

He makes it clear for himself, and for others like him, that you have to abandon the mindset of being “cool” for being an individual. Ideally, if there’s anything to be celebrated about present-day society, it’s that being an individual is widely celebrated. It’s almost as if the freedom that should have come with the First Amendment has finally arrived.

The question is, are we standing out or are we searching for individual ways to fit in?

Let’s say we call our generation, the Facebook-Twitter-YouTube (and sometimes Instagram) era. With that in mind, we have to realize the impact that social media platforms have on our individuality.

We post pieces of our lives and thoughts, and the success of those moments is measured by how many “likes” or retweets those posts receive. In other words, our thoughts and opinions are validated by how many people agree with us. That’s not standing out at all.

And what happens when you see a status on Facebook that has 100+ likes and you feel differently? If you comment on the post and say, “Hey guys, I actually disagree with this statement,” you run the risk of being attacked by 100+ people who see your comment as textual sin. You must either agree with the majority, keep quiet and go along with it or speak up and get labeled an outsider.

See Also:  Co-parenting: When One Of The Parents is Gay

But wait, if you’re an outsider, doesn’t that mean you stand out? So why does it seem like a bad thing?

Maybe we never really wanted to stand out in the first place. In fact, what we wanted more than standing out was to appear to have individuality within our own comfort zones and safety nets.

If you want to see a practical example of this, take a look at your Twitter feed. Have you ever noticed that people don’t follow people whose timelines they disagree with? The people that you follow most likely agree with you on 75 percent or more of the issues that ever arise.

Have you ever seen any significant discourse on a trending topic? (Discourse defined as an organized disagreement, not ranting blindly at one another.) On all the topics that matter, what you will see is a personal opinion followed by RTs of all of the people who replied in agreement of said opinion. If you disagree, watch how many minions are sent your way to sentence your mentions to death by a firing squad.

At a time when most of our communication is electronic and social media is our paramount medium of communication, we are forced into being judged by how many people “like” the messages that we send.

We’re supposed to be different. We’re supposed to transcend. But we can’t be transcendent if we’re going to insist on doing the same things as everybody else. We have to take the road less traveled, we have to decide to go straight when we get to the fork in the road and we have to be willing to stand alone and never accept being silenced if we hope to establish an imprint as Gen-Y. None of this is mutually exclusive, but rather necessary and required to transition into “standing out.”