Beware of the Ides of September! Cuffing Season Has Begun 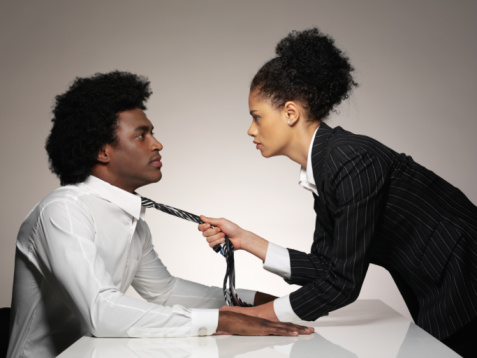 We are one weekend away from Labor Day. That’s right it’s all over. The fun that we had from Spring until now is ending. Soon the trees will change from green to brown. Galoshes will replace sandals. Boyfriend sweaters will replace summer dresses. And, rooftop rendezvouses will all but cease to exist. As the seasons change in the direction of cooler temperatures it comes to everyone’s attention that they should start thinking about who they will be hibernating with this winter. There may a small chance for a autumn tryst but that’s risky because that can still leave you lonely in the colder winter months.

Who am I kidding? Avoid getting cuffed at all costs! I’ve been saying this for years!

Although many people believe that Cuffing Season is a good thing, I’ve always thought it was the absolute worst thing that ever happens in dating. Everybody temporarily lowers their standards almost as though they have a relationship amnesty week and ends up shacking up with a person that they probably would never give the time of day otherwise. You waste anywhere from 3 to 6 months of someone’s precious time in a pseudo-relationship that really doesn’t exist because it’s only a cuffing* relationship.

* – That means that you are not really in a relationship. Do not expect to meet each other’s friends and family, do not expect a key, do not expect priority over existing plans, invitations to weddings, really great sex (you know the type that comes with a commitment that you’re going to stick around), and should either of you find another “cuff” that you want to join… there’s no penalty. Your relationship is basically a month-to-month lease.

All of this is why you have to fight to the death to avoid being cuffed by some heartless woman who plans to spend the next few months cooped up in the house with you to avoid a chilly night alone. Here are some signs that should be concerning to you:

1)      The obvious first is that she typically wouldn’t be interested in you. You may have made a few passes at her before and they fell on deaf ears. She may be a little too attractive compared to the other women you’ve dated. Or, you just can’t put your finger on what she likes about you.

2)      Then, she hints at how much she’s tired of always going out. That she would prefer to spend a quiet evening at home or at the movies over being in a noisy bar or lounge. This is her trying to hypnotize you into thinking that spooning leads to forking. Wrong, spooning doesn’t lead to forking. Forking was going to happen regardless of the spoon, the spoon is a non-motherf—–g factor.

3)      Don’t expect to have too many mutual friends. This isn’t a friend with benefits, this is a friend you can get rid of and nobody asks you what happened. By eliminating the possibility that you’ll have to see each other later, she ensures that this arrangement is no strings attached (and also in the secrecy of your own homes because there will be no group outings).

4)      She appeals to the things you like the most but you know that most women don’t care about because they aren’t affected; your ability to save money. She keeps referring to social activities that single people typically do as expensive, money-draining, or interfering with savings goals. This is supposed to make you want to stop spending money on the social scene and spend more time on the couch.

See Also:  Late Nights and Early Mornings: Make a Plan Before You Sleep Around

5)      Lastly, you’ll notice that the pace is moving a lot faster than usual. This is odd. You know why? Everything tells you that women are inherently indecisive about men. This is actually why you’re single. If you were in a relationship, you would think that women where very decisive about men because your girlfriend found you and you are together, end of story. That’s when you have to ask yourself why she’s allowing certain things to happen so fast when they used to take weeks or months..

You have to fight this.

If you find yourself in this position and it seems like the walls are closing in on you, do the exact opposite of everything on this list. Make sure she’s your typical type, only hang out in social settings, introduce her to all your friends and meet hers too, splurge and take this extremely slow. Just for good measure, tell her that you’re really looking to settle down and get married soon.

The point is, you must avoid cuffing season. It’s a complete waste of time. And, according to the numbers game, there is always a shortage of men for women. There’s going to be plenty of women who aren’t cuffed this fall/winter to “hang” out with.

See Also:  Heathen Life: 5 Things to Consider Before You Move in With Her