Role-play: How Women Make Themselves Unhappy in Relationships 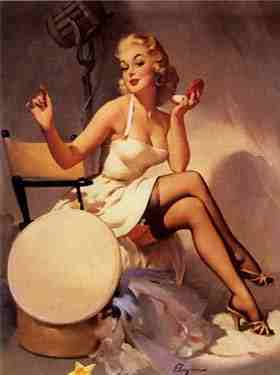 Once a relationship begins, her apartment has never seen day without the Swiffer, and she is the only woman who not only is aware of “Steak and BJ” day, but celebrates it with the enthusiasm as a child on Christmas morning. On top of that, she is oh so easy doing. She has noticed that you never opened the car door for her and occasionally break plans–maybe after football/basketball/baseball/foosball season is over, she tells herself, you will become more attentive.

After a few trysts together, you wake up to see half her makeup smeared in the pillow, and a clip in weave track stuck to the sheets. You drag yourself into the kitchen with sleep in your eye hoping she can still at least appeal to your stomach, but she never actually learned how to use that waffle iron proudly displayed on the counter top. You really don’t mean to, but you furl your eyebrows and mumble something when you see half the woman he met standing in front of you, the other half of her face and hair still in bed, and first time, don’t smell bacon frying. Now, the rest of this scene plays out according to what type of woman you are dealing with: she may say “sorry” and in turn make you feel like a slave driver, or she may just begin making hot grits with an ominous grin.

Nothing remains constant, no one is who they say they are or who want to be at every given moment, any snide comment in that situation can read as judgment. However, please keep in mind that you are a complete a**hole–you may be victim of bamboozlement.

See Also:  Where have all the good black men gone?

It would be irresponsible to make that statement without quickly touching upon the fact that women and girls are victims too. We have been taught by society and Mattel what it means to be the perfect woman. Even in this progressive era, many women still internalize varying ideologies of what we think men want. “The ideal woman…is perhaps so far above the reality of women’s lives that women themselves will continue to struggle and struggle but never attain it” concludes Jennifer Holt, author of “The Ideal Woman”. Consequently, before you have to opportunity tell her she’s desirable without having to be a Barbie/Nicki Minaj hybrid, she already is afraid you’ll find out she’s not.

Realistically, this issue seems less likely to be uncovered over makeup and bacon, but later on the relationships dynamic. While it’s understandable and commendable for one to be on his or her best behavior in the early days of a relationship, beware the line between politeness and promoting fallacy. Some women lose sight if what they want in the hopes if coming off as agreeable and infinitely competent. When we don’t get what we are expecting in return or men are expecting more than what we deem possible, it can be frustrating; but acknowledge that he simply may not know what it is we expect. What we as women fail to account for is that if we pretend to have the kitchen talent of Betty Crocker, sports knowledge of Pam Oliver, he might actually think you like baking and watching nine hours of football on Sundays. Before we claim a man is uninterested in the things we want, we have to ask ourselves–does he even know?

See Also:  On My Struggle With Weight Loss: Challenges and Change

Since us women cannot indefinitely hold our tongues or our flatulence, the very moment we slip, it can be a moment of vulnerability. A man’s knee jerk reaction can carry an unfair amount of weight, but the wounds women face in this respect may be self-inflicted. A healthy relationship in any form should not be a performance, but a partnership.

Khaholi Bailey is a native New Yorker who studied Creative Writing at Hunter College. She currently keeps a day job so that she can have access to a PC to use for freelance journalism gigs. Her ultimate goal is to get paid for writing about the nuances of the world without actually having to leave her apartment.