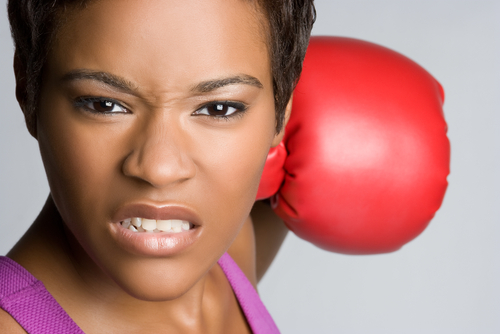 I love the Internet. It’s the only place where people create fictional images of themselves and then project that image until they either develop a following or earn notoriety. At times that notoriety is for being absolutely ridiculous. And while I’ve been no stranger to attacks on the Internet by people who have created an online persona, it never ceases to amaze me when I’m in some mess.

If you haven’t heard, I ended up in some tiff with a certain feminist on Twitter yesterday. It was silly and I had to seriously resist the urge to act silly too. In fact, when someone is already lighting up your @s at 7:30am the only thing that comes to mind is, “You gangbanging on bacon?!”

The woman took offense to an article I shared, accused it of being sexist and started her twitter rant. Twitter rants are quite hilarious too because you have to admit you aren’t really much different than this guy on this train who is clearly talking to a Sony Walkman from 1993. Not talking to anyone in particular but refusing to stop talking until you make a point.

Anyway, that got me to thinking about a few thoughts that come to mind when  feminists attack male bloggers:

People need to stop acting like men are predisposed to be stupid and ignorant. Especially people who don’t think it’s okay to act like women are predisposed to be emotional and irrational. This seriously pisses intelligent men off and you know what else, you need intelligent men. I hate when I have to remind someone that I’m smart and I don’t need someone preaching and teaching to me like I’m an idiot. It’s unproductive to any conversation that could possibly lead to progress.

See Also:  Marriage For All

People need to stop assuming that male bloggers are incapable of being informed about real issues. If you have this image that all male bloggers are sitting behind their laptops and not reading articles, engaging in discussions and studying their verticals then you are sadly mistaken. Most of us spend way too much time in research and when we come up against someone who thinks their emotions validate their opinions nothing gets done.

People need to stop assuming that everyone needs to be included in every message for it not to be offensive. Not every message or post that is about women is only applicable to women. Sometimes that’s just the topic of the specific post. It’s quite possible that the message could include men but the way my blog is setup… I got a word count and a bounce rate. That’s why messages are concise and specific but unless it’s stated that it is exclusive to a particular group, don’t assume it.

People need to stop leading into discourse with accusations instead of asking for clarity. They also need to really understand the difference. The presumption that you know what someone is really trying to say or that you know what they really meant is silly. Stop it. If you accuse someone of something understand that at that very point in your discourse if you are not absolutely correct, you’ll be dismissed. Instead, try leading with a question to obtain clarity.

People need to stop insulting someone’s intelligence when it’s clear they’ve reached a stalemate in a conversation. They also need to understand that just because two sides don’t agree, doesn’t mean that one is right and the other is wrong. It’s very possible to have a discussion that reaches exhaustion without a clear solution or agreement. That’s fine. Also, it’s very possible to accept in a discussion that you were mistaken and appreciate the new perspective. What’s not okay is when you are about to lose an argument and you attempt to attack the messenger. The phrase, “keep it on wax” means something. If you can’t do that then you probably shouldn’t engage in the conversation to begin with.

People need to understand that sometimes when a conversation is abruptly ended it’s not because the issues were too complex or the other person is admitting defeat but maybe it’s because their principles of communication have been violated. I have rules about how I communicate with a person and when you break them I stop talking to you. I do this in every part of my life. That’s why when I say, “this conversation is over” it doesn’t mean I’m wrong or I can’t engage, it simply means I’m not engaging. The problem is some people don’t know how to talk to people. They are offensive, aggressive and sometimes way too turned up for a productive conversation. If your argument style is aggressive, you won’t be in one with me.

See Also:  Why Some Men Fear A "Church" Woman

That said, I’m over yesterday and being the subject of that woman’s rant.

I will proceed to now be silly and remind people of two important things.

A blog is a short form post on a website which is typically opinion. It is not a literary masterpiece. It is not at the same level as the NY Times or Esquire. If you attempt to read every blog hoping that it will have writing on the level of a doctoral dissertation, you will always be disappointed. However, if you got the point, the blog did its job. Move on.

Re: RTs are greatly appreciated

When you take offense to something that’s written here and RT it on Twitter, we greatly appreciate you sharing our content with your followers. I am not going to mention the name of the person who inspired this post because it’s not about them. And also, SBM has rules about people who take shots at the throne. No free promotion.

tags: attacks feminism feminists male bloggers
previous Why Are More Women Choosing to Not Marry?
next He Wants Me to Meet His Parents, But Who Else is Worth Meeting?