Scoring and DEA Investigations are Up in the NFL…Where Do We Go From Here? 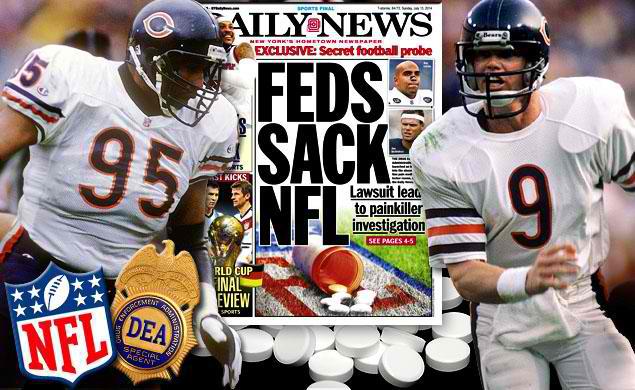 A couple things happened this weekend in the NFL that got my attention.

Second, the DEA conducted surprise investigations of team doctors across the league. They caught up with teams in the locker room post game and even at the airport in the case of the Baltimore Ravens. SB Nation did a good, succinct take down of the investigations, but here’s the Cliff Notes:

Because of the class-action suit against the NFL, brought by 1,000+ former players, the practices of NFL trainers and doctors are in question. There have been countless accusations that players are illegally given painkillers to keep them on the field (duh), and the DEA decided to follow up on that to see what they could find.

I wrote about the NFL potentially losing popularity a while ago, and these seem like examples of theories coming to life. This leads to a couple factors that make me wonder what the NFL will look like in another few years.

Reacting to law suits, like the one mentioned above, and the undeniable science suggesting football is, in fact, dangerous, the NFL has put new rules in place that (to put it mildly) favor the offense.

No more hitting the quarterback below the knee or above the shoulders.

No more touching wide receivers after a few steps.

No more hitting wide receivers just after a catch.

So instead of making it onto the latest segment of “JACKED UP!” hits like this:

Besides new rules, this weekend suggests another trend:

The DEA investigation, while not a warranted, legal “search,” was definitely a sign that Roger Goddell won’t get to be his own judge, jury and executioner forever.

There has been a ton of media coverage on the dangers of football, and the questionable tactics teams used to keep players upright. Dan LeBatard’s interview with Jason Taylor shed light on some of this. He starts the interview with this:

He was just a few blessed hours from having his leg amputated. He played games, plural, with a hidden and taped catheter running from his armpit to his heart. His calf was oozing blood for so many months, from September of one year to February of another, that he had to have the equivalent of a drain installed. This is a story of the private pain endured in pursuit of public glory, just one man’s broken body on a battlefield littered with thousands of them. As death and depression and dementia addle football’s mind, persuading some of the gladiators to kill themselves as a solution to end all the pain, and as the media finally shines a light on football’s concussed skull at the very iceberg-top of the problem, we begin the anatomy of Taylor’s story at the very bottom … with his feet.

And the description of shooting pain killers into Taylor’s feet reads like a graphic Civil War novel.

As more stories like this continue to come out, it won’t just be nervous parents taking note. This weekend showed that the real, live, actual Feds are starting to pay attention. The plus side of this shift means less drug-addicted, hobbling retired players. The cynic would note it also means more time away from the game for players (to, you know, heal) and a worse product on the field.

So what happens going forward? –

Hard to know for sure, of course. But if Twitter feeds and media coverage are any gauge, then the NFL is fine right now.

Maybe the NFL will continue to win despite itself. Fewer concussion-causing hits mean more points, more star quarterbacks, and fodder for the NFL RedZone channel.

Or maybe the talent pipeline shrinks as fewer kids decide/are allowed to play football. And the future All Pro running back that’s 12 year old now ends up playing basketball, or baseball, or soccer.

I’d actually lean toward the latter. The stats are hard to ignore. And as much as I still enjoy watching the Lions (I’m lying…no Lions fan actually enjoys watching them) and tracking my fantasy teams, I’m not sure I’d feel comfortable with my kid out there sacrificing his body and long-term health. And I know I’m not alone.

How do you feel? Are you seeing what I am? Do you enjoy the new rules in the NFL? Have the new rules or health research changed how much you watch?