So What Do Jay Z and Iggy Azalea Owe the #ICantBreathe Movement? 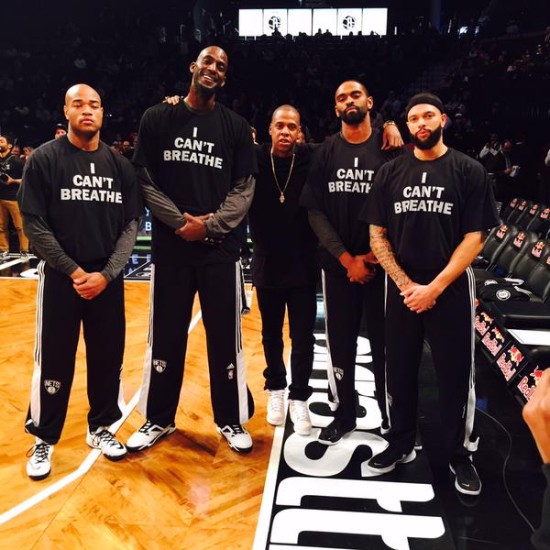 If you’re a frequent Tweeter/Facebooker, you’ve probably seen the photo above.

If not, it’s from last night’s Brooklyn Nets game. Jay Z posed with members of the team beforehand, setting off a social media tidal wave in the process.

In my unscientific opinion, the reaction was about 80/20, with the majority questioning why Jay couldn’t/didn’t/refused to wear an “I Can’t Breathe” shirt along with the players. The others were excited to see him showing support.

The Nets are part of a growing number of athletes showing support for protesters of the Eric Garner grand jury (in)decision. The situation begs two questions:

Let’s tackle these one at a time…

It’s clear Jay Z is in this picture on purpose. He’s in the middle of the group of four players. It’s not like he was there be accident or photobombing the picture.

He’s there in support of the message. As much as a picture can communicate one’s intentions, this is doing a fine job showing that Jay is on our side.

There’s no “right” way to protest or show your support. Stratifying supporters only waters down the movement. Who does that help?

If you forgot 8th grade English, here’s a brief rundown:

Three pigs take over their farm in a revolt, aiming to establish a utopia with animals free of human rule (“Animalism”). All goes well until the pigs are at odds over the future of the farm. One pig overthrows another, and things devolve from there. Around the end, the principles of Animalism devolve into one rule: 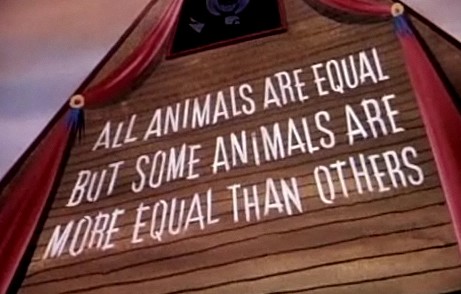 The nationwide protests of the Garner and Michael Brown grand juries are big. Thousands across the country are creating history. We have an opportunity to change police and governmental policy.

Let’s not undermine it by deciding some protesters are more equal than others.

So where are all the other Black celebs?

All that said above, I’m surprised and disappointed that more celebrities haven’t shown outward support for this cause.

Many of them, in a moment of honesty, would admit that they could have been Brown or Garner…or Bell…or Grant and so on. They come from similar neighborhoods. If not many of their fans do.

I don’t think they owe anything to the movement. Participating is a personal decision. One that could have repercussions from fans and sponsors. Their only allegiance is to self. That’s fine. They might agree with the decisions not to indict. And that’s fine.

I selfishly wish more would use their voice to show support and inspire those who are putting their lives at risk. But if I got everything I wanted, I’d be 6’5 and on the Detroit Pistons.

Well, maybe not the Pistons this year…but still.

Bonus question: Doesn’t Iggy Azalea owe something to this movement?

I wish the loud minority (as record sales would indicate) would stop pretending they’re mad at Iggy.

If you’re unaware, some feel that the Australian rapper is, essentially, a fraud. They believe she co-opted Black culture, and is playing a part…capitalizing on the glamorous parts of Black culture without enduring any of the difficulties of actually being Black.

No one owns hip hop culture. It is of Black culture, having started there and being nurtured in Black communities across the country. But at some point our Hip Hop Baby grew up and became a bona fide part of the zeitgeist. It’s no longer a subculture existing in America, it is America. Everyone gets to participate.

Sorry, everyone gets to play.

See Also:  Who Is Trinidad James? The Man Behind All Gold Everything

That’s how I feel on the intersection between #ICantBreathe, sports, and celebrity. How about you? Does Jay Z owe us more? How about Iggy Azalea?

tags: #ICantBreathe Brooklyn Nets Eric Garner ferguson hip hop I Can't Breathe iggy azalea michael brown protests Staten Island
previous The Time Was Illmatic: An Interview With The Director And Producer Of "Time Is Illmatic"
next Why Andrew Hawkins and Derrick Rose are Winning the Month in Sports