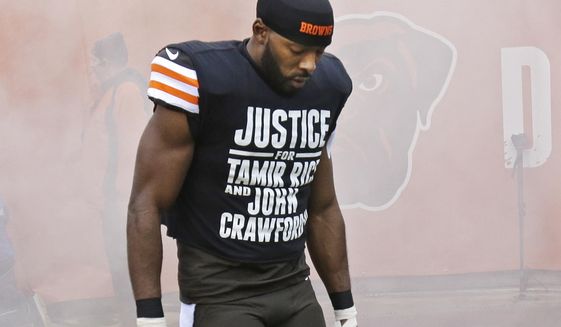 It has been three weeks since the Ferguson grand jury decided not to indict Darren Wilson for killing Michael Brown.

In that short time, many similar incidents have occurred (both killings of unarmed Black males and the failure to indict their killers), and the nation, generally, has erupted.

I write about sports here, so I paid particular attention as the protests crossed over into the athletic realm. These stories have started meaningful discussions about policing and race in America. Let’s look at the varied reactions among professional athletes. 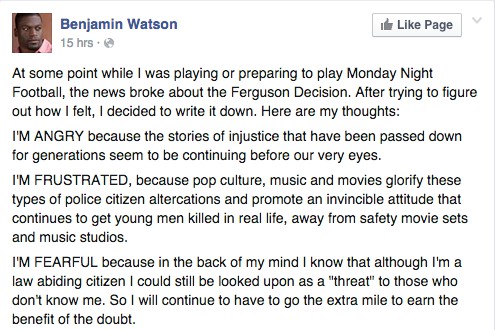 This is no fun to type. Watson went to my high school so I’ve always rooted for him. He’s had a successful career as a pro, and I hope he has 15 more years in the league.

If you missed it, Watson posted a now-viral post on Facebook (full text here) in the wake of the Ferguson decision. He explains his range of emotions over the decision, the demonstrations afterward, and the state of race relations in America.

It was very balanced, but Watson ignores some issues that make the whole post fall flat for me.

First, Watson’s “sympathy” and “confusion” represent a defeatist attitude that excuses Wilson’s actions. We only have one side of Wilson’s story because he killed the only other person who could refute it.

Second, that defeatist attitude gives cops a free pass. The police are here to protect us. Not boss us around, and definitely not shoot us if we “disobey” them.

Maybe Brown punched Wilson and tried to take his gun (which is ridiculous…what Black man do you know that would reach into a cop’s car for anything?)…WE DON’T KNOW. And we don’t know because Wilson shot at Brown 12 TIMES.

It’s not ok to present Brown and Wilson as equals. Wilson needs to be held to a higher standard as a police officer. The fact that he never has to defend himself in court is. not. ok.

Finally, Watson’s solution for all of this is God. I would argue centuries of racism, Jim Crow and segregation (all defended with religion, by the way) caused this, and it will take policy (police, economic, and government), education and time to undo it. 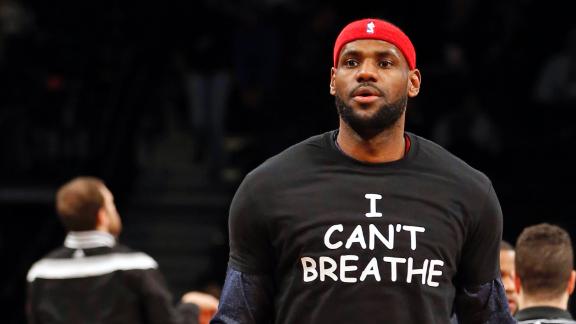 LeBron was among many athletes who wore “I Can’t Breathe” shirts recently. He’s the most famous one, so let’s just use him as a representative.

When asked about wearing the shirt, LeBron n ‘nem said they were honoring the families affected by the deaths of their loved ones.

Essentially, they side stepped the political ramifications of their shirts, choosing instead to use them as a memorial.

This is an unassailable position. Who can be upset by athletes using their notoriety to honor others? It would’ve been great for them to take a political stand, but as I said last week, they don’t owe us that.

I’m not upset about this because no one could be. It’s just…fine. Great to see athletes acknowledging society’s issues. Not great that they didn’t really have a stated opinion. 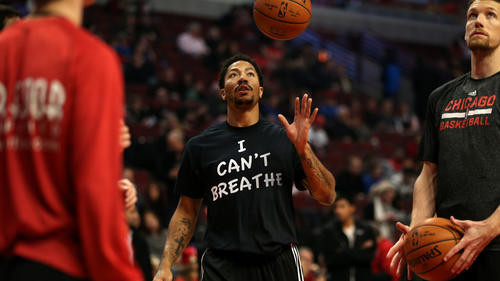 I’m highlighting both of these guys because they not only wore shirts in support of the victims of police violence, they stood tall afterwards when explaining why.

For both men, the shirts were a symbol that they believed justice was not served for Eric Garner, Tamir Rice or John Crawford. They each made a gesture that was decidedly on one side of the fence. Choosing not to play it safe by riding the middle.

I appreciate that. Not just because I agree, but because it’s what I wish more athletes would do (although, again, I understand why and that they don’t have to).

That Rose and Hawkins cited fatherhood as the compelling factor in wearing their shirts is interesting. Though I can’t speak on yet, I imagine having a child will significantly change my worldview. Probably from “me and wife” to “family I need to provide for.”

A thought that is somehow exciting and terrifying at the same time.

Those are my power rankings. How did you see it? Were you happy with Watson’s Facebook post? What about LeBron, Rose, and Hawkins? Could they all be doing more? If you’re a parent, does that change your opinion?