Home Featured So who the Hell is the NBA MVP This Season?
Featured
March 10, 2015 Joe Sargent 6

So who the Hell is the NBA MVP This Season?

The NBA season is winding down, and one of the best stories to follow has been the MVP race.

For the first time in a while, this race feels truly wide open.

LeBron James is still the best player in the league, but it took him a while (and a strange two-week midseason vacation) to get going. Plus, the Cavaliers are just now starting to look like the team we thought they’d be.

Kevin Durant has battled injuries all year, and has no chance at defending his MVP trophy.

So that opens it up to a few guys who, while deserving, would definitely be battling for third place votes is James and Durant were 100%.

There are a few ways to define the MVP, which is why picking just one choice this year is so fun. Let’s break down the contenders and pick a winner:

The best guy on the best team: Stephen Curry

This is usually the MVP every season. If you’re a lazy voter, you can look at the standings and pick the best player from either of the two 1-seeds (Eastern or Western Conference). You’ll get a defensible pick and probably the winner.

This year is no different.

Curry has carried the Golden State Warriors to a relatively easy top-seed in the West; a feat that no one predicted before the season. He’s orchestrating the league’s second best offense by efficiency. He’s leading the league in three-pointers made and steals.

See Also:  5 NBA Playoff Storylines That Could Make Round 2 as Good as Round 1

Simply put…he’s arguably the best point guard in the league on a team that will win about 65 games this season. Plus, he can go for 50 points on a given night. AND, he can do this:

If the Oklahoma City Thunder makes the playoffs this season, it will be because of Westbrook. Period.

A story like that is (and should be) enough for MVP consideration.

Westbrook has pushed his game to a higher level in the absence of Kevin Durant at exactly the right time. The Thunder are in a tight playoff race, and Westbrook isn’t just playing well…he’s leading the league in scoring and has five triple doubles in his last six games.

Westbrook is playing like a basketball machine. A mix of Michael Jordan and RoboCop. Dr. J and an avatar. Have to at least consider him for MVP, right?

The dictionary definition of most “valuable:” James Harden 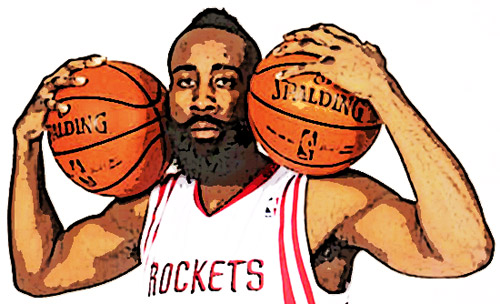 What do the Houston Rockets do without Harden?

Probably draft in the lottery. Instead they are headed to the playoffs, currently sitting 3rd in the West.

On top of that, he’s a model of offensive efficiency, getting to the basket at will and sitting in the top 5 of three pointers made.

Houston would need, like, 2.9 players to replace everything Harden does for them on offense. That is the definition of value. And something that has him on the short list of MVP candidates.

The best player (unless we’re tired of him): LeBron James

So who’s the MVP? I’d cast my fictitious ballot for Harden. He has been the most consistently excellent all season. Despite his reputation on defense, he’s been at least average on that side of the ball.

I wouldn’t be mad at any of these guys winning. But Harden gets the slight edge.

What about you? Who should be the MVP this season?