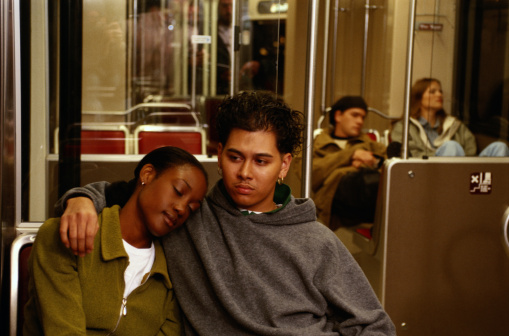 This is a testimonial submitted anonymously on Dating Diaries DMV. I recently did an event in DC with Nicole and we linked up to do some collaborating and add a little paint where it ain’t here at SBM.

I went on a date with this chick who was cool and towards the end of the night she asked if I “smoked”. I knew she didn’t mean cigarettes but figured it was something “green” so I was like no, but I didn’t care if she smoked. She said OK, but after wards I’m going to be horny. I was like OK, so I took her to her connect and this is where it messed me up. She came out his house and got in the back seat. I was like you can smoke up here, it doesn’t bother me. She said she was fine so at the first red light we came to she leaned behind my seat and lit up and she took a puff. The next thing I know I smell burning CRACK!! I told her ass to get the hell out my car. That was the last time I saw her.

I met David outside of my office building one afternoon as I was walking to my car in the parking lot. He was tall, dark, and handsome and had a smile that lit up the already bright parking lot! We exchanged telephone numbers and went on about our day. The next day David called and we had a brief, but funny, conversation. He asked if I was available Friday evening for dinner and I said yes. That Friday he picked me up at my house and we drove to the Cheesecake Factory and had dinner. David was dressed nicely and we ordered heartily from the drink, appetizer, and dinner menu. At this point, I was feeling him, he was down to earth and funny, two qualities that are sometimes hard to come by these days! By the end of dinner I was certain we would go out again!

See Also:  Tis The Season: Time to Define Your Relationship

When we both finished eating our dessert the waiter placed the bill on the table. David smiled at me and in a very calm, non-chalant voice said, “Oh no, I don’t have my wallet.” “Excuse me?” I said as I looked at our hundred dollar bill. “I’m sorry sweetie, but I don’t have my wallet,” he said again withOUT remorse. “Oh ok, that’s too bad but I will just pay my portion of the bill then,” I replied. All sorts of things were racing through my head, like is this man serious, and does he really think he can pull this type of move on me and expect to get away with it??? The fact that he remained so calm when he said it and didn’t offer any apologies or seem embarrassed let me know this was a game he was running and he thought I was about to fall for it.

When the waiter came back I immediately explained the situation and told him that I would pay my portion of the bill but that was it. David remained calm and tried to tell the waiter that he did not have any money whatsoever to pay the remainder of the bill so therefore he would not be paying. The waiter got his manager who walked over to the table to see what was going on. As the situation escalated I decided right then and there that I would call a friend of mine to come pick me up. I told David that I had to use the restroom and politely excused myself to the bathroom to call my friend. In that instance I knew I was not returning to the table to get caught up in that nonsense. As I made my way back to the front of the restaurant to wait for my friend, I saw two police officers heading towards the table where David was sitting and next thing I know they begin putting him in handcuffs. I shook my head in disbelief, I couldn’t believe it, I had gone on my first and last date with JAILBAIT!

See Also:  Are You Worthy Of Being Committed To?

Nicole Williams is a blogger and radio host from Silver Spring, MD who loves to travel and “run her mouth”. When Nicole is not writing, or co-hosting her weekly radio show on blis.fm/theconnect, she is reading and enjoying the company of her family and friends. Nicole started Dating Diaries as a blog back in 2011 to document the hilarious, yet very TRUE dating stories of her and her friends. You can submit your stories anonymously to [email protected] .

We’re going to be posting these testimonials weekly on SBM. We want to know your thoughts and we also want to encourage you to visit Nicole’s blog, Dating Diaries DMV. It’s freaking hilarious! You can get lost there for hours. You can even submit a story of your own. Also, don’t forget you can still write us at [email protected] to submit questions anonymously for advice. Anyway, what are your thoughts? Are these anomalies or could you see this happening to you?

previous Ask A Black Man: The Experience
next With Age Comes Clarity in Relationships