What the Hell Does Roger Goodell Have to do to Ruin the NFL? 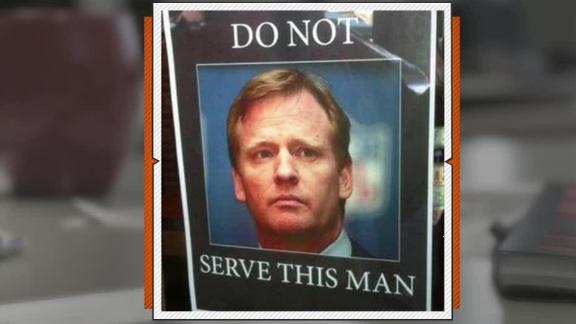 If you care about sports at all, you’ve no doubt learned that the NFL handed down a ridiculous suspension/fine/loss of draft pick punishment to the New England Patriots and Tom Brady.

By any reasonable measure, this was an overreach by Roger Goodell, a commissioner whose reputation and legacy are wholly defined by missteps like this. This situation begs the question:

Is there anything Goodell can do to mess up the NFL?

And by “mess up” I mean the only thing that matters…f*ck up the money.

So far, Goodell might have pulled off the trifecta of gross mismanagement. He’s close to collecting the Triforce of Ineptitude if you will. Let’s examine:

And this matters because the NFL Player’s Association is supposed to be his partner in all this. There’s a Collective Bargaining Agreement for a reason. It exists to keep order; a set of rules that dictates everything from punishments (in this case), to compensation, to contract length.

Being commissioner should be easy. There’s a handbook for what to do. And still, here we are with Sherriff Goodell determined to make shit up as he goes along.

Lose the confidence of ownership –

See Also:  The 13 Qualities that Define a Man

This one is tricky.

While the NFLPA is a partner, Goodell answers to league’s owners. How long will the owners be content with their public face being covered in egg over and over?

Maybe they’re happy to let Goodell be the target of our slings and arrows…as long as the money keeps coming.

But, all things equal, wouldn’t you prefer the public face of your league not be seen as a jackass?

So is there anything Goodell could do to get you to stop caring about/watching the NFL? Is this actually good PR for the league? Can this much coverage of a league in the offseason ever be a bad thing?

previous Aging Spurs Bow Out in First Round of Playoffs: End of a Dynasty?
next 14 Reasons Why Each Team Should Win the NBA Lottery Tonight