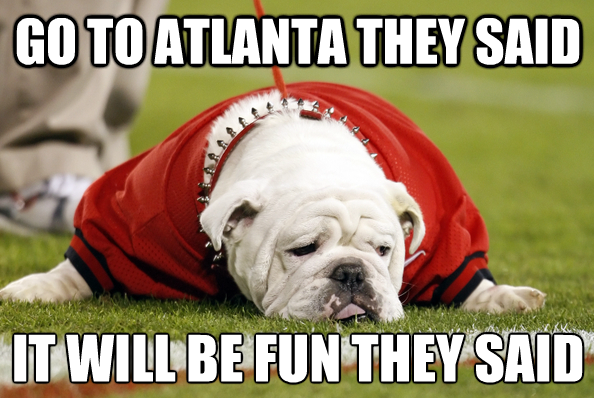 “Atlanta is a sport cesspool.”

I mean, that’s easy to say. Atlanta sports fans get a bad rap, and without really knowing that’s an easy statement to accept on its face.

But is it true?

That’s what I set to find out last weekend. I had the good fortune of going to Atlanta for work (company card BALLIIIIIIIN!!), which would include four days in the city culminating with the Monday Night Football opener against the Philadelphia Eagles.

I decided this hard-hitting journalistic study would consist of three parts:

How Comfortable Did Philly Fans Feel?

So how does Atlanta stack up? Here’s what I found:

On any given NFL weekend, you expect to see jerseys, hats, t-shirts all over the place. When I was at Indiana University, you couldn’t escape the Colts jerseys all over campus. Now that I live in Chicago, it’s the same thing with the (sorry ass) Bears.

One telltale sign of an engaged, non-cesspool sports town is the number of home team colors you see around town.

Atlanta gets a solid D in this category.

The Falcons gear was nowhere to be seen until Monday afternoon. The Falcons fans came out en masse on gameday…in the immediate vicinity of the stadium…but what city couldn’t do that?

I expected a lot more here.

This is another given for any non-cesspoolish city.

Especially for the season opener at home. I wore a Falcons shirt Monday to blend in with the subjects. Not a nann (shoutout Trick Daddy) high five, or “Rise Up” for me as I wandered around.

If you go anywhere in America with a University of Michigan shirt on, you’re guaranteed to get a “Go Blue” even in passing. That’s passion.

C- Atlanta. This is not looking good.

How Comfortable Did Philly Fans Feel? –

This is where it got embarrassing.

I went to a day party on Sunday at a sports bar. It was great. Good music, good (free) food, and TVs everywhere with every game on.

And then the Eagles fans showed up.

They took over! In Atlanta! Doing that stupid chant! Exclamation points!

Seriously, look at this video(!!):

You probably can’t hear it, but there was trap music in the background and hundreds of ATLiens happily dancing along.

I think fights over sports are stupid. When I hear about a (usually Raiders) fan stabbing another one in the parking lot after a game, I smh because it’s NEVER that serious.

HOW-E-VAH that’s ridiculous. These Eagles are far too comfortable here.

And what’s worse, this carried over to the game!

Here is a video I took entering the stadium…apparently during an Eagles rally:

Posting this here to embed in this week's post for SingleBlackMale. The topic is an exploration into horribleness of Atlanta as a sports town. Yes, this was shot in Atlanta. Crazy, right? Check it out on SingleBlackMale.org!

Again, this was in Atlanta.

I have no idea how the game sounded on TV since I was there (#humblebrag), but the biggest audience pops during the game were definitely from Eagles fans for their big plays.

Here’s the thing…I came into this generally curious whether Atlanta was the terrible sports town people say it is.

Let me tell you: it is. Maybe worse.

Defend yourselves ATLiens. Why am I wrong about the sports scene in your city?