You Ruined the Fatty: The 21st Century Version of The Star Bellied Sneetches

I intended on writing about something related to relationships today. I really and truthfully did. Like most times when I sat down to write the article I found myself distracted and on Twitter. Then, I was distracted and on Instagram. Somewhere in between all of the distractions I found a way to have intellectual conversation with myself on a very important topic, the ruination of the fatty.

I can think that not even a decade ago when a man saw a woman with a fatty he thought to himself… damn look at that. But now, the first question that comes to mind is, I wonder if that’s real or fake. Think about it, when your boy posts a pic in the groupme or on Facebook that’s actually the first thing that comes to mind. The internet has become flooded with altered posteriors.

It’s not like this wasn’t predicted for us years ago. But here in the year of our Lord two thousand and fifteen, you most certainly cannot trust a big butt and a smile. It’s been ruined. I like Stadium as much as the next dude but most of my nights there now leave me confused. I wasn’t always confused. There was a time when I didn’t care. To be 100% honest, I still don’t care. I don’t care. I only care about the fact that a 100% real fatty is now on the endangered species list.

See Also:  Before You Get Married: The 5 Relationships Everyone Has Before You Find The One

Let me tell you what happened.

First, there was Photoshop. Some asshat found out how to alter a woman’s posterior using photoshop. They figured if you could use Photoshop to make her skinny, why not use it to make her fat. I’m sure this was a harmless act but we never thought about what would happen if that power fell into the wrong hands. It didn’t take long for everyone to catch on that if you look for some distortion in the mirror or the doorway, you could easily sniff out a bad a Photoshop job and fake picture. However, we don’t know what to think because there are some out there who are experts beyond our imagination.

Second, there was just flat out getting implants. When I say implants, I’m using that term to save time. Whether you put silicone shots in there or had fat from some other part of your body inserted in there for today’s article we’re calling that, implants. The implants are really in response to those women who were born with the fatty and glorified for it.

Third, there were the fitness models who started purporting that if you do a whole bunch of squats and other funny looking exercises you could go from a flatty to a fatty in a matter of months. I’m not sold that it’s completely false but I have trouble buying into the concept that you can build that much muscle in the posterior area. I can agree that shape can improve and that some marginal gains to size can be made but only to an extent.

See Also:  4 Reasons Why Being A Nice Guy Sucks

So now we’ve got three scenarios and what complicates this system is that at this point all these women are now choosing hybrids of the three scenarios. They get implants and then tell everybody on Instagram that they’re a fitness trainer. Or they’re a fitness trainer with some really good camera equipment and Photoshop. I’ve been saying for years now that we should get rid of filters and all those other apps/plugins that people use on Instagram.

That brings me to the story of the Sneetches, 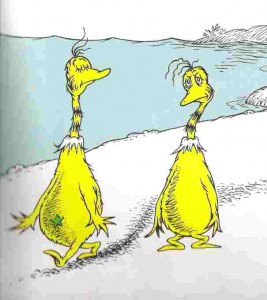 The first story in the collection tells of a group of yellow creatures called Sneetches, some of whom have a green star on their bellies. At the beginning of the story, Sneetches with stars discriminate against and shun those without. A mischievously scheming salesman named Sylvester McMonkey McBean (calling himself the Fix-It-Up Chappie) appears and offers the Sneetches without stars the chance to get them with his Star-On machine, for three dollars. The treatment is instantly popular, but this upsets the original star-bellied Sneetches, as they are in danger of losing their special status. McBean then tells them about his Star-Off machine, costing ten dollars, and the Sneetches who originally had stars happily pay the money to have them removed in order to remain special. However, McBean does not share the prejudices of the Sneetches, and allows the recently starred Sneetches through this machine as well. Ultimately this escalates, with the Sneetches running from one machine to the next….

“…until neither the Plain nor the Star-Bellies knew

And that’s why I say it’s been ruined. We can’t tell what’s real, fake, fake-real or real-fake. We’re all just left a bit confused.

See Also:  Employers and Colleges Want to Deebo You Out of Your Passwords