A Quarter Season Recap: The Best of Times and Worst of Times in the NBA

What a time to be an NBA fan! We’re a month into the season and have a team on pace for 82-0 AND 0-82 somehow. Since it has been a minute since I’ve written around these parts, it’s time to check in on all things NBA. Here are 6 things worth-a-shit and ain’t-shit so far: 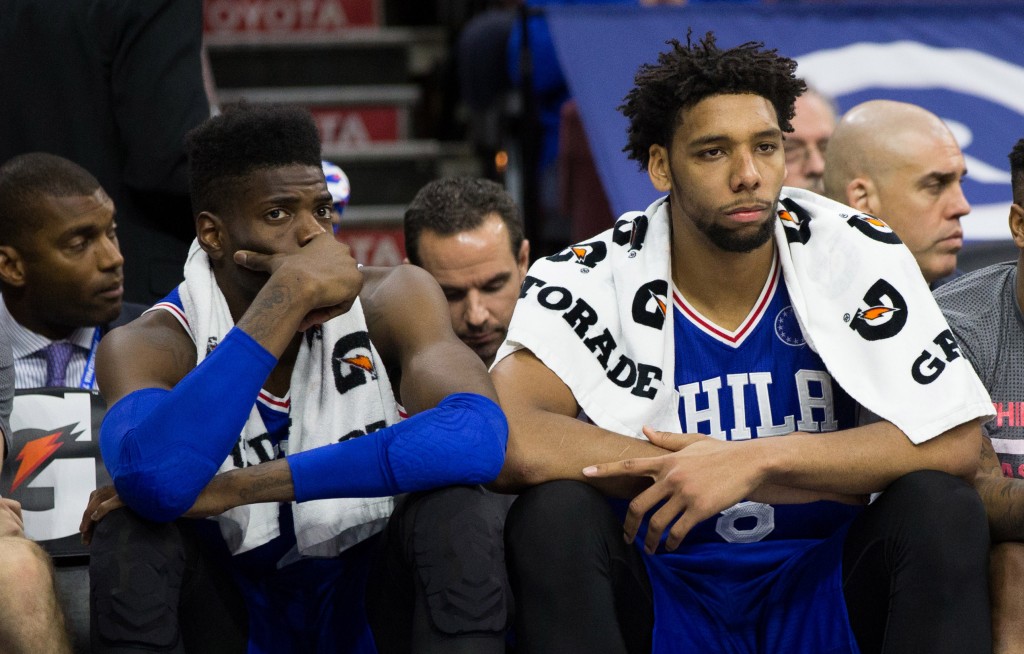 The Sixers are either three years into The Process, OR they haven’t started yet. It’s really hard to tell. They’re working on an 18-game losing streak. They’re tanking for draft picks that either aren’t on the team or haven’t played yet. And now they’re watching another pick go all Lindsay Lohan.

This team is a trainwreck. That’s clear.

And what’s worse, the Eagles are a floater in the same toilet the Sixers were flushed in. Plus, Penn State football sucks, AND Villanova’s college basketball team will be upset in the second round again come March.

Things are looking pretty bleak for Philadelphia sports fans. They’ll be on par with Atlanta if they aren’t careful.

Worth a Shit – The Golden State Warriors somehow improving this season

The Warriors are the exact opposite of everything Sixers. They are basketball nirvana. They are heroin if heroin took on human form.

See Also:  Three and a Half Stories to Look Forward to This NFL Season

(I imagine that last one is true. I’ve never done heroin, but it has to be good for people to still be getting addicted to it in 2015. I feel like the jury’s back on heroin by now.)

Anyway, it has all been said on the Warriors at this point. They’re 19-0, headed for the best record ever, and feature Steph Curry who (despite wearing Under Armor kicks) has become the best player ever. There is no more hyperbole left, so I’ll just end this with this highlight from last night:

I won’t roast Kobe anywhere near as bad as Deadspin did yesterday, but Kobe needs to hang them up. He’s done all the winning, scored all the points, and not-passed all the non-passes that are coming in his career.

The only thing left for him this season are hollow applause as he misses hella shots in a 15 win season. How is that helping anything?

Obviously everyone, especially one of the all-time greats, gets to go out on his own terms, but DAMN(!!). When there’s only downside to playing out the string, why not quit while we still have some positive memories of his career? I’d hate for the first memory of Kobe to be an airballed 3-pointer in 20 years like some of the other greats that held on too long.

See Also:  One of the Worst Music Videos Ever: Spartan High School Style

Worth a Shit – The Minnesota Timberwolves’ future

Their coach sucks, which is no surprise given the tragic circumstances he walked into. But it’s impossible to watch the Wolves and not get excited for their future. Karl-Anthony Towns is 20. Beware, NBA.

The Kardashian Kurse is worse than Madden. Sheesh!

Worth a Shit – Kristaps Porzingis becoming the 6OD

If you’re a Knicks fan and want to claim you were happy when 6OD was picked, call your mother right now and apologize for lying.

The new Prince of Putbacks has quieted A LOT of critics so far. Including me and you too, Mr./Ms. Knick Fan.

I love basketball, and this season is making it easy. The quality of play has been as good as the NFL has been bad this season. There’s so much else to cover, but I’ll leave that to you.

What has stuck out to you most so far this season, either positive or negative?