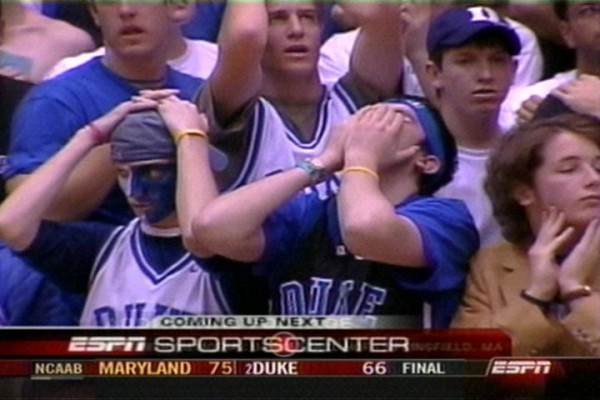 Like any rational sports fan, I hate Duke basketball.

Always on TV. Never playing road games outside of the ACC. Always with a punchable-face-having white guy.

This team just isn’t as hate-able as the rest.

I can’t stand the thought of Duke becoming just another team. I really enjoy hating them with the burning fury of 1,000 suns. Every hero needs a villain, and Duke is my Donald Trump. This metaphor works on two levels because it turns the Cameron Crazies into Trump’s supporters.

That sounds about right.

I think I figured out why Duke is less vomit-inducing and how we can restore balance in the world:

This was a shocker. After decades of 4-year players only, Coach K went all Calipari and started signing players he knew would bolt after one year on campus.

Part of the charm of hating Duke is hating generations of Blue Devils all at once.

AND Nolan Smith, a Freshman

ALL AT ONCE! There was a generation’s worth of hate for the whole family to enjoy. We’re missing that now with the Jabari’s, Kyrie’s and Jahlil’s skipping town after just one year.

Duke a’int that great this year –

Duke wasn’t even ranked two weeks ago. That would have been headline news in Casa de Sargent years ago. This year it was a tweet, 2 texts, and a GroupMe message.

The truth is Duke is only fun to hate when they’re good. Otherwise they’re just another ok team on ESPN every week.

Now, it’s annoying to have to watch an average team every week, but it’s no fun rooting for them to lose. Louisville beat Duke and it wasn’t even an upset. Louisville was favored by 7!

Chris Rock talked about this. You can’t make fun of a team that was just aight to begin with. That’s just mean.

I’m not as into college basketball this year –

This is probably the biggest culprit.

I’m headed to Las Vegas in a couple weeks for the first weekend of March Madness (also known as the best weekend in sports). I’ve wanted to do this forever, but I’m also fully aware that I have NO idea who’s supposed to win this year. That won’t stop me from gambling though, so chances are I’ll be signing up for one of those Montel Williams loans by April.

So I think that’s it. Hopefully Duke can get healthy, rack up some wins, and be at their hate-able-est by March when they lose in the first round to Hofstra.

Hopefully you can help me reclaim my Duke hatred. Help me get my Silky Johnson on before the Tournament starts.

Duke Haters Anonymous meeting in the comments below!