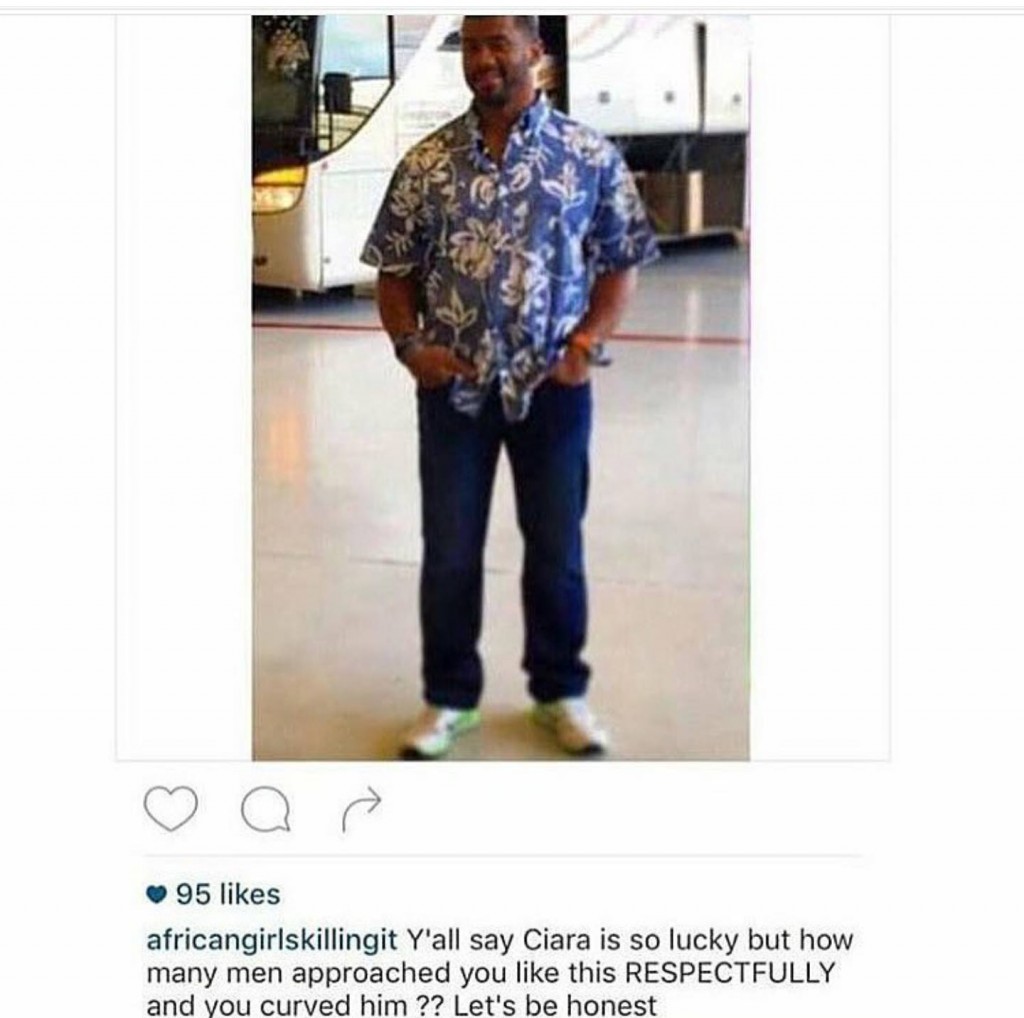 The piece used the new relationship between Russell Wilson and Ciara as proof that there are men that will abstain from sex with the right woman. I spent most of that post reassuring celibate or prospective celibate women that there is hope for them if they are willing to be patient.

Russell Wilson and Ciara are engaged. They seem to be enamored with one another still and it’s a sight to see. Now check out the photo above. “Y’all say Ciara is so lucky but how many men approached you like this RESPECTFULLY and you curved him??.” That quote hits a proverbial button. We have all been here before. The conversation of nice guys finishing last. This is also a new conversation of a “nice guy” finishing first. This is also a conversation of “sticking” it to the women who have curved “nice guys” in the past.

Russell Wilson has struck a chord over the better part of a year.

We can thank him for the goodness that is Future’s “Purple Rain” mixtape. Russel Wilson embodies the consummate man. He doesn’t run his mouth publicly disparaging anyone. He handles all of his dealings with character on and off of the field. To put the cherry on top he has him a tall tall glass of water on his arm. A woman who I think is a sweetheart regardless of who she has dated. He and Ciara hit it off and all the cameras are on the dudes hating on Russell and the women hating on Ciara. Also, there may be bitter “nice guys” who echo the sentiments in the photo above.

See Also:  The Throwback: Giving your ex one more chance

To make a long story short, we should all move past the “nice guy” conversation.

I consider myself to be a nice guy. I think I’m as nice as they come. In my experiences dating, I haven’t gotten all of the women that I have been interested in. As a matter of fact, recently I caught up with an old crush who said she didn’t think I was serious about dating her because I didn’t try to kiss her on a date. Yep, my head is starting to itch too. But anyway, my point is that I have seen women come and women go. I honestly think a lot of guys that have dated women after I have weren’t the best for them. One way or another those ladies found out. However, I never have blamed any of those things on being a nice guy.

I recognize that there is a clear dynamic.

Quite frankly if you depict yourself to be a pushover  then you may not appeal to as many women in general. Those women may also take advantage of that quality. Blaming your misfortunes as a man on being a nice guy is a cop out. Look at dating as a sport. If you’re looking to score (succeed however you define it) then you have to adjust your offense to the defense. You are always on offense fellas. Be yourself but apply that in different ways as needed.

See Also:  How to Find a Good Relationship Partner

To the women who have “curved” the nice guys; it’s nothing new.

Maybe someone  as nice as Russell Wilson has approached you. Maybe you weren’t captivated by him initially. But Ciara dated 50 Cent and Future prior to dating Russell. Everyone matures and goes through their changes. I refuse to be bitter and tell women that they were wrong for their past choices. I’m humble. We both know what it is. Rubbing it in doesn’t make it better nor does it change anything. If a Russell Wilson is your cup of tea now, then drink up.

We can combat having this discussion by maturing.

All of our thinking has to mature. The bottom line is that if your love life isn’t yielding positive returns then you need to examine it. Find out what you think isn’t working and be open to tweaking it. It’s all trial and error till we get it right. Congrats to Russ and Ci Ci.

Have any of you curved bad guys? Fellas, do you think women are talking silliness saying that they’re looking for a Russel? Is this couple as happy as they are because they haven’t had sex as yet? Talk to me, let’s have some fun with this.

DamnPops is a writer on the staff at SBM and has done projects with Madame Noire and Joint Interest: “I’m not a biter, I’m a writer for myself and others. ” Follow me on Twitter @DamnPOPS